As the fountains around Cranbrook are drained and the chilly air sets in, I thought we could warm up with a little molten iron.

In 1962, Julius Schmidt was appointed artist-in-residence after the departure of Berthold “Tex” Schiwetz from the Sculpture department. Schmidt received his BFA from Cranbrook in 1953 and his MFA in 1955, working under Schiwetz. Schmidt worked almost exclusively with iron, a rough and difficult material previously unexplored at the Academy. Early in his tenure, he set about raising money from Detroit-area tool and die companies to build Cranbrook a foundry. 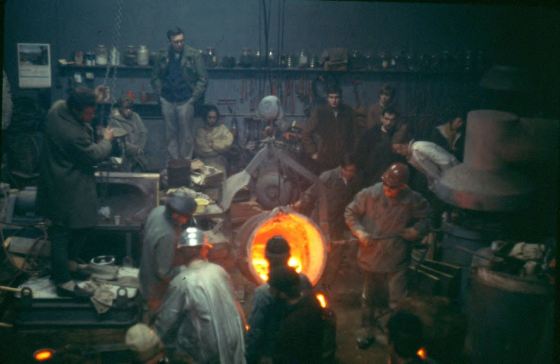 Constructed in the open space to the east of Carl Milles’ large studio, the concrete block and glass curtain wall forge building was the first physical addition to the Academy campus since Saarinen died in 1950.

Schmidt and some students used the forge extensively for their work, perhaps to the disadvantage of students who didn’t want to work with iron. In 1966 students working under Schmidt designed, sculpted, cast, and then fired a cannon featuring a caricature of Zoltan Sepeshy’s nose and mouth. Schmidt left Cranbrook in 1970, and I can’t find evidence of iron pours after his departure (today, students who wish to cast their own iron participate in an annual pour at the College for Creative Studies.) In the forge now is the Academy’s metal shop as well as equipment for 3D printing, laser cutting, and vacuum forming–all situated around the forge equipment.

Cannon being fired out of the foundry, May 1966. Paul Rueger, photographer.

If you would like to visit the foundry, join me on the Behind-the-Scenes tour: Saarinen House: Presidents/Residents, next Saturday, October 27th. This is the final date for this tour that includes a visit to the exhibition at Saarinen House, the studio space of Wallace Mitchell, the foundry, Cranbrook Archives, as well as several other stops. Click here for more information.