The Detroit connections of James E. Scripps and George G. Booth are well-documented: Scripps as founder of the Detroit News and founding member of what is today the Detroit Institute of Arts, and Booth as a founder of the Detroit Society of Arts and Crafts.  Less known, perhaps, is a venture near the end of Scripps’s life that helped create the Scripps Branch of the Detroit Public Library at Trumbull and Myrtle. The library was actually George Booth’s former home, renovated to accommodate library services. It stood in Scripps Park though a different library (the Frederick Douglass branch) sits there now.

Here’s the story. When George Gough Booth and Ellen Warren Scripps married in 1887, James Scripps built a house for them, designed by Mason & Rice, across the street from his own on Trumbull Ave. Fast forward to 1905. James Scripps donated 15 lots of property, on Grand River between Trumbull and Commonwealth, to the city of Detroit as a site for a park and branch library. He included $50,000 to be used for city beautification.

The Library Commission, on which Scripps served for five years, was already thinking of putting a branch in this area (no doubt influenced by Scripps), so the city gave the Commission the land. Now things get more confusing. Upon the death of James Scripps in 1906, the estate purchased the George Booth home (located next door to Scripps’s donated property; by this time the Booths had moved to Cranbrook) and included that in the gift. So the Library Commission didn’t have to build a new branch and used the $14,000 designated for that purpose to renovate Booth’s house as a library. 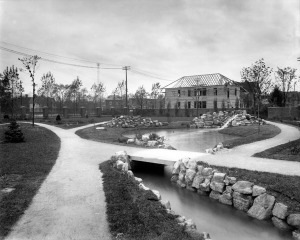 In fulfilling Scripps’s intent for a park, Booth hired H.J. Corfield, landscape gardener who designed the basic landscape for Booth’s Cranbrook estate.  Booth wrote to Corfield “I feel quite sure that we can carry through a nice piece of work and will be able to pay the foundation for a small park of unusual attractiveness in this city.”  Corfield transformed land that was “little better than a city dump …  into one of the prettiest parks in the city of Detroit.”

The former Booth home was almost doubled in size and opened on July 3, 1909 as Scripps Branch Library.

There’s another interesting twist to the story. In 1898, James Scripps added an 800-ton octagonal chapter house, modeled after the one in Westminster Abbey, to his own home on Trumbull across the street from the Booth’s. It contained his book and art collection. In 1927, James’s son, William E. Scripps, made a gift of the tower to the Library, along with its collections, it was moved across the street and attached to the Scripps Branch Library!

The sad ending is that the branch closed in 1959, and was demolished in 1966. The Gothic tower was razed sometime later, after a valiant attempt to save structure, by George Booth’s youngest son, Henry Scripps Booth, failed.