Confessions of a Book Nerd

I have a confession to make. The smell of library books, an afternoon at an independent book store, re-reading a favorite novel – these are my ultimate indulgences. I could spend hours reading book blogs, listening to author interviews, or pouring over book-related tchotchkes on Etsy. I am a book nerd. My (nearly) one year as an Archivist at Cranbrook has been heaven. I discover something new every time I have the opportunity to walk into George Booth’s personal library at Cranbrook House. I find profound satisfaction in creating a catalog record for a new book or discussing MARC records with colleagues.

One of my favorite collections at Cranbrook is the Cranbrook Press and Photo Department Records. While working on a Cranbrook Press request recently, I came across the work of the bookbinder, Jean Eschmann (1896-1961), hired by George Booth in 1929. Eschmann was hired to set up the bookbinding workshop in the Arts and Crafts Studios at Cranbrook, where he remained until 1933 when desperate financial times forced the closure of the studio. 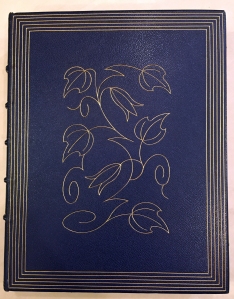 Educated in Zurich, Eschmann traveled and studied in Austria, France and Switzerland. He came to the United States with his family in 1919. He was a member of the Society of Arts and Crafts in Boston and studied with Mary C. Sears. In 1929 George Booth hired Eschmann to create handmade bindings for the Art library and for his own personal library. Eschmann also taught bookbinding and hand-tooling classes to the community. 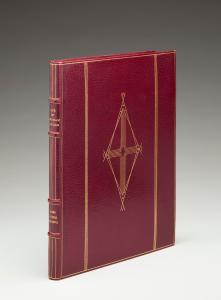 Eschmann’s work has been exhibited at various museums in the United States, as well as at the Book Workers Guild in New York. His bindings were included at the World Fair in Paris in 1937 and at the Golden Gate Exposition in San Francisco in 1939. In 1945 Eschmann received the emblem for Meritorious Service from the Civilian Awards Committee of the Surgeon General’s Office for his work in restoring thousands of rare books at the Army Medical Library during World War II.

Evidence of Eschmann’s beautiful leather and tooling work can be seen in several examples in the rare book collections here in the Archives, and also in the Academy of Art library. I hope you enjoy the examples in this post. They definitely make this book nerd swoon!

The Case of the Bogdani

The other night I saw the most interesting show on PBS called “Fake or Forgery.” An investigative journalist and two noted art sleuths joined forces with cutting edge scientists to discover the truth behind a painting the owner thought to be a Degas. They thoroughly searched the provenance of the painting, and used scientific methods like X-ray fluorescence (XRF) to determine if the pigments used in the painting were compatible with Degas’ known palette. It made me think of the many works of art across the Cranbrook campus that could benefit from in-depth scientific research like this. And, it prompted me to relay the story of a discovery the archives staff made several years ago.

The painting we fondly refer to as “The Bogdani” was originally purchased by George Booth for Kingswood School for Girls, where it hung in the Domestic Science Dining Room. Purportedly painted by noted Hungarian Jakob Bogdani (1658-1724), the still life was found in a storage room badly in need of cleaning and restoration.

The painting was conserved by Ken Katz of Conservation & Museum Services in Detroit. During the several months of conservation, we were able to visit the studio in order to see the work in process, and the results were amazing. 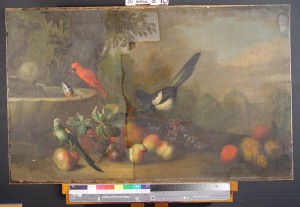 As I looked closely at the work, my heart almost stopped beating. Bogdani’s signature was gone, and in its place was another name! My first thought was how hard I had lobbied to get the painting conserved and now it was a forgery!  However, after doing additional research, I discovered that the artist, Tobias Stranover (1684-1731) was actually Bogdani’s son-in-law and former student. Phew! Although this meant the still life was painted around 1810 instead of 1790, at least we still had an original painted by an artist who, with his father-in-law, provided the finest exotic bird and animal paintings in England. The painting currently hangs in the reading room of Cranbrook Archives. 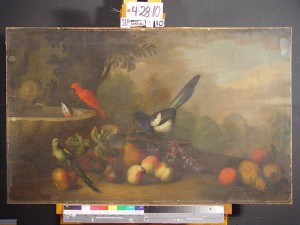 After conservation, details in the painting can be seen can be seen more clearly, and the brilliance of the colors pop.

This gentleman caught my eye as a colleague was browsing through a George G. Booth (GGB) scrapbook containing clippings of illustrations from magazines. The scrapbook was GGB’s “Dream Book” of art and architecture examples on which to model his new home at Cranbrook, and is part of his papers.

Amidst illustrations of terraces, statues and waterfalls was this Alpine dandy. Why is his picture there, and what is that contraption he’s sitting on? A search on the Internet revealed no information on this early 20th century, bladed “vehicle” for seated conveyance. If anyone out there knows more about it, I’d be delighted to know!

Good news! One of the Archives’ volunteers, Lois Harsh, spent a cold afternoon diligently searching the Internet and found this web site, www.ski-bike.org that identifies several versions of the ski bike. This particular version is from around 1914. Thanks, Lois!

A Man of Many Words

At Cranbrook, the legacy of Samuel Simspon Marquis is clearly visible. A trusted advisor to George Booth, Dr. Marquis oversaw the completion of Christ Church Cranbrook and became the first Rector when the parish was officially established in 1927. He was also instrumental in the founding of the Cranbrook School for Boys and was a Trustee of the school from 1926-1939. On 23 May 1940, Marquis Hall was dedicated in his honor.

Prior to his arrival at Cranbrook, Dr. Marquis was invited by Henry Ford to head the Sociological Department at Ford Motor Company. Marquis remained in this position for five years and accompanied Ford on the ill-fated “Peace Ship” to Europe in 1915. In 1923 Marquis published Henry Ford: An Interpretation, one of the first works written by an employee close to Ford. Marquis’ work with Ford is well-documented in our collection here at Cranbrook and at the Benson Ford Research Center.

While doing research here at Cranbrook, I discovered that Marquis was also a prolific writer. He wrote not only about religious topics, but about history, the political climate of the day, and even poetry. Below are samples of the book plates for the unpublished Marquis Book of Poems. Enjoy!

Often times in collections we discover materials that are unexpected, rare, or just plain fabulous.  The following images are all of the above.  Several years ago, when processing a set of negatives from the Institute of Science, I was pleasantly surprised to discover a set of photographic images of Native Americans, primarily Odawa/Ottawa from Leelanau County in northern Michigan.  They were taken by Walter E. Hastings (1887-1965) between 1928-1933.  Hastings was a naturalist, photographer, and lecturer, and was Michigan’s first conservation film-maker. 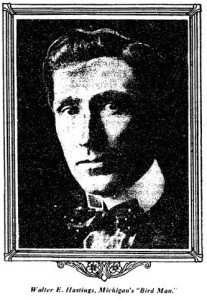 From “He Knows All About Michigan’s Birds,” Detroit Free Press, 12 March 1922

Hastings’s interest in nature began as a child when his mother put together a collection of stones, shells, and Native American artifacts for him with the hope that he might become a naturalist. Clearly, it worked!  His interest in photography began in 1918 when he received an inexpensive camera for Christmas from his boy scout troop. From 1921-1932, Hastings worked for the University of Michigan Museum as the “Custodian of Birds’ Eggs.”  In that capacity, he served as a collections manager, enlarging and arranging the collection, and took numerous photographs which documented the nesting habits of Michigan birds.  Employed as the photographer for the Michigan Department of Conservation from 1926-1951, Hastings was a pioneer of wildlife and conservation photography. 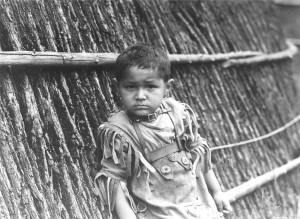