With the strong lineage of Modern masters here at Cranbrook, it is no surprise that Frank Lloyd Wright has some relationship to the campus and its history. As a renowned architect, Wright had many projects all over Michigan from Kalamazoo, Okemos, Benton Harbor, Ann Arbor, Detroit, and Bloomfield Hills. Many of these homes came out of his “Usonian Architecture.” 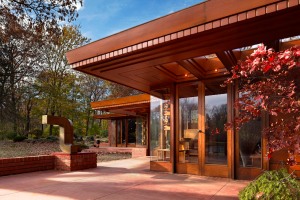 The term Usonian means “of the United States,” and was used by Wright to emphasize his architecture as uniquely American, specifically the American Midwest.  The Usonian style was Wright’s solution to the rise of suburbia where people moved outside of cities. This was his solution to what he deemed “the small house problem,” a direct response to post war needs and the growing necessity of affordable and comfortable homes. 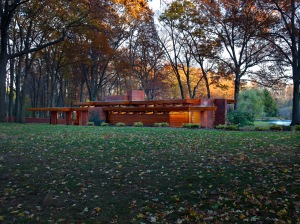 Partnering with The Towbes Foundation, Cranbrook Center for Collections and Research will be providing tours of one of Wright’s Usonian homes in Bloomfield Hills, the Melvin Maxwell and Sara Stein Smith House. Known as “My Haven” by the owners, Wright called the house, “my little gem.” Designed in 1946 and completed in 1950 the home is a great example in Wright’s oeuvre of a Usonian home.

Another of Wrights’ Usonian homes within Bloomfield Hills can also be connected to Cranbrook.   Commissioned by Gregor S. Affleck, a chemical engineer who invented an automotive fast-drying paint, the Affleck House was completed in 1941. Affleck’s son, Gregor Porter Affleck, attended Cranbrook Academy of Art and studied Architecture with Eliel Saarinen from 1944-1945. In 1978, the Affleck children donated the house to Lawrence Technological University.

Saarinen and Wright were colleagues who supported each other in the field of Architecture, at least as much as two established architects with considerable egos could get along. Wright visited Cranbrook at least three times, for lectures in 1935, 1936 and 1937. All were sold out to standing room only.

The Melvin Maxwell and Sara Stein Smith House will be open for tours May – October on one Friday and one Sunday of each month. For more information on the tours, please visit our website.

The Golden Anniversary of Horizons-Upward Bound at Cranbrook

The Archives new exhibition, “50 Years Strong: The Evolution of HUB at Cranbrook,” opens this Saturday, April 25th, in the lower level of Cranbrook Art Museum. Horizons-Upward Bound, known as HUB, has its roots in a partnership with Cranbrook Schools that began in 1965. Over the past fifty years, HUB has evolved into a year-round program which prepares both boys and girls with limited financial opportunities to enter and succeed in post-secondary education. 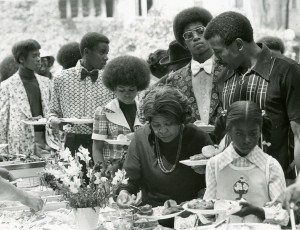 The exhibition sheds light on the history of the program and its continued affiliation with Cranbrook Schools and highlights key individuals and events that have helped make it the successful legacy it is today. Through news clippings, program invitations, brochures and newsletters, student publications, and historic photographs, the exhibition presents a chronological history of the multi-faceted academic enrichment program known as HUB.

Even though Cranbrook experienced a few snow flurries today, the campus daffodils are also in bloom. It reminds me of what was known as “Daffodil Hill.” In 1953, in anticipation of Cranbrook’s Golden Jubilee celebration (the 50th anniversary of the year the Booths purchased the original 175 acres), Henry Scripps Booth led an effort to raise funds to plant daffodils at Cranbrook House.

The Cranbrook Foundation Daffodil Fund was established and enough money was raised to plant 10,000 daffodils in the fall. By 1955, visitors were flocking to the campus just to see them.

In honor of Cranbrook Academy of Art’s Graduate Degree Show which opens this weekend, here are a few images from past degree shows. 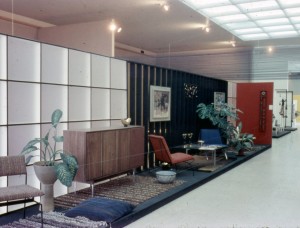 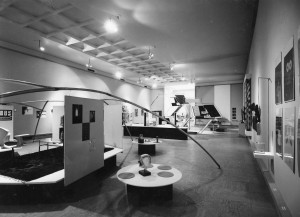 Photo Friday: In the Shadow of Man

Fascinating and talented people visit the Cranbrook campus each year, including artists, educators, politicians, and scientists. Every so often, I come across something in the Archives which makes me think I wish I had been here then! This is one of those times – an illustrated lecture sponsored by Cranbrook Institute of Science, “In the Shadow of Man,” by Dr. Jane Goodall. Due to an anticipated large crowd, the April 1978 event was held off-campus in Birmingham Seaholm High School’s auditorium.

Every Sunday night I look forward to watching “Who Do You Think You Are?” A show that combines historical research, genealogy, and archives all in one? Perfect for a research geek like me. This past Sunday, actor Tony Goldwyn was the featured celebrity seeking to uncover his roots. I never realized that his paternal grandfather is THE Samuel Goldwyn! And even more surprisingly is that his maternal grandfather is Sidney Coe Howard. I bolted upright in my chair when I heard that name as, of course, Howard has a Cranbrook connection!

Howard (1891-1939) was the American playwright and screenwriter best known as the posthumous winner of the 1939 Academy of Award for adaptation of the screen play for Gone with the Wind. However, 23 years earlier, Howard penned the script for the Detroit Society of Arts and Crafts (DSAC) production, The Cranbrook Masque. Commissioned by George Booth at the suggestion of director Sam Hume, Howard wrote the Masque as the dedication program for Booth’s new Greek Theatre at Cranbrook. Howard and Hume sought to utilize every part of the theatre in order to demonstrate its possibilities. Costumes were designed and made at Cranbrook by the costume department of the DSAC, led by Katherine McEwen, and were fitted to the actors onsite. 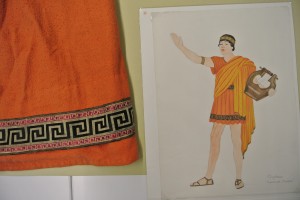 The Costume for Orpheus is part of Cranbrook’s Cultural Properties collection.

The Cranbrook Masque tells the story of the conflict between romance and materialism, and was expressed through five episodes showing the development of drama throughout the ages – ancient Greece, medieval Europe, Elizabethan England, and 17th century Italy. Through research and travel in Europe, Howard was able to gather material to ensure the historical accuracy of both the scenes and the dialogue. A contemporary news critic wrote “the use of archaic words and the introduction of long-forgotten customs are said by experts to be flawless.” Howard also made use of the natural outdoor setting of the Greek Theatre for special effects. In the first episode, timed at sunset, Pan made his appearance silhouetted against the backdrop of the setting sun. As the light faded, a sophisticated artificial lighting system, designed by Hume, was gradually introduced. 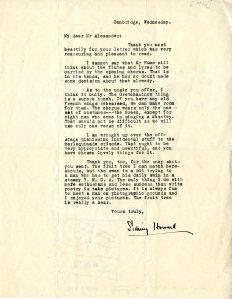 The performance ran for two consecutive nights in June 1916, and the theatre was filled to capacity with more than 500 guests. The Cranbrook Masque was the first public production of Sidney Coe Howard’s, yet he did not attend the performance. Though the Booths invited Howard to visit Cranbrook, he sailed for France in early June to serve as an ambulance driver for the duration of WWI.

Shortly after the opening of Kingswood School for Girls in the fall of 1931, headmistress Katherine Adams reported that horseback riding would be a part of the physical education program, due in large part to the cooperation of nearby Bloomfield Open Hunt Club.  Several of the girls already boarded horses in nearby stables, including the Hunt Club. The Kingswood Riding Club was officially established in 1939 and the school catalog outlined that girls would ride on the Hunt Club’s bridle paths in spring and fall, and in the covered ring during winter months.  Girls rode on Wednesday afternoons as part of “club day” but the sport quickly became so popular that they also rode on Sunday mornings.  In the spring of 1940, Cranbrook School boys joined the girls for the Sunday morning rides, during which they enjoyed breakfast at the Club House.

In September 1941, Unger expressed hope that 1-2 indoor shows would be held during the winter, and that more girls would own horses. “The school horses are all right for beginners but as was so apparent at the show the girls who had their own mounts made the best showing.”  Headmistress Margaret Augur felt the school could not encourage horse ownership (due to the added expense for the girls) and worried that competitions would become a “rich girl’s sport” and thus, a bad tendency for the school.

The second annual Kingswood Horse Show was held on May 20, 1942 at Outland Riding Stable with judged competitions and an awards presentation.  Virginia McCullough won first place in all of the classes she entered – Hunters Class, 3 Foot Jump, Horsemanship for Owners, Open Jumping 3’6” and Hunter Hacks. Phyllis Klinger took first in the Three-gaited Class and Anita Bray for Horsemanship for Non-Owners.  During the fall of 1942, the girls planned a spring horse show but by December, gas rationing due to World War II meant that the girls were unable to secure taxis to the stables.  By March 1943, taxi service was discontinued and even though riding continued to appear as a sport in the school catalog until 1947, the club was never reinstated.