I’m not a hugely sentimental person, but I am a nostalgic one (I swear, there’s a difference). As I leave Cranbrook after four years here to embark on the next phase of my career, I can’t help but think about all the different places on campus I will miss. Here are my top five:

Cranbrook House – It’s no secret that my undisputed favorite spot on campus is Cranbrook House. On a campus known for its love of Eliel Saarinen, Cranbrook House is an ode to the Arts & Crafts movement designed by Albert Kahn.  George Booth, a devoted disciple of the ideals of William Morris, surrounded his family with hand-carved wood, ornamental plasterwork, and art as useful as it is beautiful. And let’s not forget the incredible forty-acres of gardens that surround the house.  And even more amazing, the conservation/restoration of the house and gardens is run by a group of dedicated volunteers.  Cranbrook House and Gardens Auxiliary, you rock! 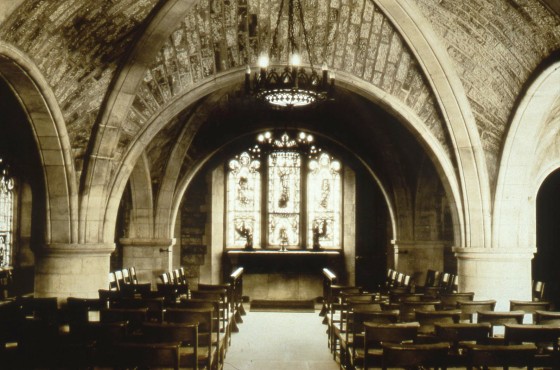 St. Dunstan’s Chapel – Full disclosure—I’m not Christian.  But there is something so calming and peaceful about sitting in St. Dunstan’s Chapel, nestled in the lower level of Christ Church Cranbrook. Maybe it’s my love for all things Arts & Crafts (St. Dunstan was the Patron of Artists and Craftsmen), but Christ Church ranks second of my favorite Booth-founded buildings. I especially love the ode to Cranbrook craftsmen carved on the columns.

Thornlea Studio – How could I not give a nod to the building where I spent my first three years as an archivist at Cranbrook (and one as an intern during graduate school). Designed as his architectural studio, Henry Scripps Booth built the Studio in 1938, right next to his home, Thornlea. After Henry died in 1988, he left the building to be used as the archives. I left many broken heels on the narrow stairs of the Studio, but I’ll always remember it fondly.

Dining Hall, Kingswood Campus. The furniture upholstery and trim are a bright coral pink. The Festival of the May Queen tapestry, designed by Loja Saarinen and woven by the Studio Loja Saarinen weavers, hangs against the wall. Cranbrook Archives.

Kingswood Dining Hall – It’s probably no coincidence I prefer Kingswood’s dining hall to Cranbrook’s, since my favorite color is pink (could the chairs be any more adorable?). But having eaten at both dining halls, I maintain the food at Kingswood is better (admittedly, I’ve gotten into some heated arguments over this). Food aside, I love the art deco interior of Kingswood Dining Hall and its focal centerpiece, the Festival of the May Queen tapestry (woven by Studio Loja Saarinen).

The Greek Theatre – Just steps away from Cranbrook House sits a testament to the Booth’s playful side (while still maintaining a devotion to all things Arts & Crafts). One of Cranbrook’s earliest buildings (1915), it was used by the Detroit Society of Arts & Crafts to put on plays, including the critically acclaimed Cranbrook Masque.  Inspired by the success of the Masque, several productions were written and performed by members of the Booth family.

*Editor’s note: for the past four years, Robbie has worked tirelessly for the entire Cranbrook community.  Her incredible depth of knowledge, can-do spirit, and amazing sense of humor will be missed, as will her contributions to Cranbrook Kitchen Sink. —SR

3 thoughts on “Five Things in Four Years: A Cranbrook Goodbye*”