House of the Poet

In 1995 a project was initiated to create a living monument to honor Cranbrook’s dedication to poetic imagination. The project, House of the Poet, was to be built on the ridge overlooking Lake Jonah and would honor works of imagination in art, sciences, and letters. Architect and educator, John Hejduk (1929-2000), was commissioned to develop plans for the building.

Hejduk largely abstained from conventional practice, but is known for his drawings that were combined into poetic and often highly personal narratives. Despite completing relatively few buildings, Hejduk is considered one of the most influential architects and theorists of the twentieth century. In an essay about Hejduk, architect Andreas Angelidakis states, “His drawings and writings, his essential approach to architecture, continue to function as a blueprint for a practice without clients, commissions, or even realization. What he built was a world of images and words.”

Hejduk designed a house built on stilts that included a bedroom, bath, living room, dining room, and kitchen. The plan was to create a space where “esteemed visitors” to the campus could stay. The exterior consisted of stucco in green, red, blue, and gunmetal, with a zinc roof. 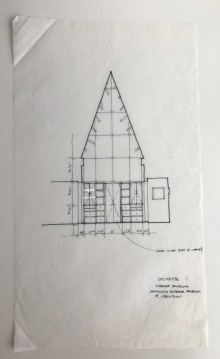 In the fall of 1995, architects Dan Hoffman and Jennifer Lee of the Cranbrook Architecture Office (CAO) worked towards the project’s completion. Faculty and students from the Academy of Art’s Department of Architecture would provide the majority of the labor for the construction of the building, continuing the tradition of the integration of arts and crafts in the original buildings on campus. The CAO created extensive cost estimations and budgets, and thoroughly researched available materials for the construction of the house.

Digital model of the House of the Poet – view from Academy Way with the sculpture of Jonah and the Whale in the foreground.

Project correspondence indicated plans to complete the building in time to coincide with a 1997 exhibition at Cranbrook Art Museum honoring the work of John Hejduk. The project seemed set to move forward, however, due to lack of sufficient funding, was canceled.

Special thanks to Rebecca Kallen (CKU ‘08) who contributed to the research of this blog.

5 thoughts on “House of the Poet”