A Place Where Art and Science Meet

Some of my favorite blogs, such as My Modern Met, capture the connections between science and art. At Cranbrook, the intersection of these two worlds often occurs when I delve into a research request. I recently found myself in this happy place as I discovered information about the Mary Soper Pope Memorial award, while researching botanist Emma Lucy Braun. Cranbrook Institute of Science awarded the medal to Braun in 1952. 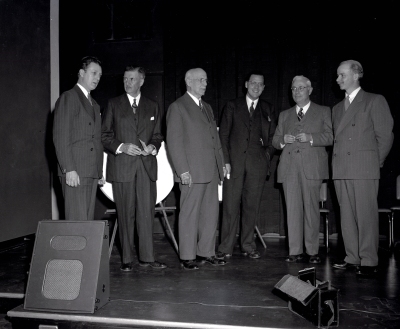 Mary Soper Pope (1872-1940) was the wife of Gustavus Debrille Pope (1873-1952). Gustavus Pope, a Detroit manufacturer and humanitarian, was among many things the director of the Detroit Museum of Art, president of the Detroit Society of Arts and Crafts, a Cranbrook Foundation Board of Trustees charter member, and a board member of both the Cranbrook Academy of Art and the Institute of Science.

In 1946, the Trustees of the Institute announced the foundation of the Mary Soper Pope Memorial medal to be granted as often as the Board deemed desirable for “noteworthy and distinguished accomplishment in the field of plant sciences.” The award was a memorial to Mary Soper Pope as a tribute to her “thoughtful nature, her quiet yet inquiring spirit, and her constant pleasure in the beauty of growing things.” The Institute Trustees commissioned sculptor Marshall Fredericks (1908-1998) to design the medal. Fredericks taught at Kingswood School and Cranbrook Academy of Art from 1932 until he enlisted in the armed forces in 1942. According to correspondence in the Cranbrook Institute of Science Director’s Papers, this was Fredericks’ first commission since his return from service as a Lieutenant Colonel in the Army Air Forces.

I love Fredericks’ design. On the obverse, the medal bears the figure of a woman holding a delicate seedling before the eyes of a child. The reverse is a profusion of vegetal growth and in it a chameleon. 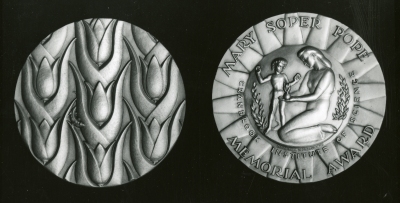 With these principles in mind, the Institute awarded the medal to seventeen scientists between 1946-1970, including botanist Emma Lucy Braun, ecologist William Vogt, and soil scientist, Edgar T. Wherry. While I enjoyed the initial research about Braun that led me to reading about this award, I loved following the Detroit and Cranbrook connections between art and science.

3 thoughts on “A Place Where Art and Science Meet”