A Face Above Beauty

Sometimes we walk past something 100 times and see it but never really “notice” it. For me, it is the masque of “Art”  (left) in the Cranbrook School Quadrangle, near the dining hall. It is a woman’s face beautifully created by sculptress Elizabeth Palmer Bradfield, but, as always, there is more to the story.

Elizabeth Virginia (Palmer) Bradfield (1875-1954) was born in Port Huron and grew up in Pontiac. Her grandfather was Charles Henry Palmer (railroad and mining developer who established the Pewabic mine in the Upper Peninsula). The Palmer family was well known in Pontiac and their house still exists on Huron Street. In the months before her wedding, Elizabeth traveled to Paris with her parents, where she studied sculpture at the Académie Julian in Paris. In 1896, she married Thomas P. Bradfield.

In 1914, Bradfield began exhibiting her work — first paintings, then sculpture — in the Scarab Club’s Annual Exhibition at the Detroit Museum of Arts, alongside such artists as Myron Barlow, Katherine McEwen, and James Scripps Booth. The Scarab Club honored her sculpture “Myra” with their first presentation of the annual Scarab-Hopkin Prize for Sculpture. She exhibited again in 1915, 1916, 1917, and 1921. In 1921, she won “Honorable Mention” for her bronze sculpture “Baby’s Head.”

It is likely George Gough Booth met Bradfield at one of these exhibitions; correspondence between them began in 1926 when Booth purchased a small bronze of a dog from her.

Booth then commissioned her to model “two large groups of Great Danes ready for plaster cast” to be displayed at Cranbrook School. These sculptures were to be approximately 6 feet high, by 2 feet wide, by 3 feet tall, but subject to Eliel Saarinen’s approval. Bradfield used the studio and architectural office, without expense to her. It is not known if Bradfield ever completed these large dogs, or if Saarinen negated the idea, but the sculptures were never realized in full scale. Milles’ “Running Dogs” probably replaced them on the Cranbrook Campus.

The masque of “Art” was purchased by Booth in October 1927. It was exhibited in two shows. One was in March 1929 – the annual exhibition of the Detroit Society of Women Painters. It was written up in the Detroit News, which said, “The masque has the imponderable quality we find in things of lasting beauty.”

It was then in the first Cranbrook Art Museum for several years before being installed over the “Beauty Arch” in Cranbrook School’s Quadrangle. 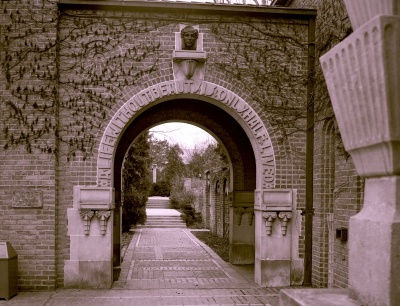 The “Art” Masque, that “lasting beauty,” hangs over George Booth’s famous quote, “A life without beauty is only half lived” on the so-called “Beauty Arch” in Cranbrook School’s Quadrangle

3 thoughts on “A Face Above Beauty”