If you grew up in the Midwest you’ve likely been sledding at some point during the winter months. But have you ever been on a toboggan run?

According to the Olympic Movement:

Sleighing is one of the oldest winter sports. Descriptions of the sport can be found in 16th-century literature, but as a racing sport it can be traced to the mid-19th century, when British tourists started sliding down snowbound roads in the Alps. British and American holidaymakers built the first toboggan run in Davos in 1882.

Images in the archives’ historic photograph collection indicate there were once two such runs on Cranbrook grounds.

The first photographs of a toboggan run date from 1928 and feature an elevated wooden platform and slide situated by an ice-skating rink at the northern edge of Cranbrook School campus, where the Williams Natatorium now stands. A November 1, 1928 notice in the Birmingham Eccentric provides further evidence: “Construction on a toboggan slide for the Cranbrook students has begun, according to school authorities. It will run down the large hill from behind the school, possibly across the canoe lagoon, and will be ready for use when enough snow permits.” A November 12, 1928 Cranbrook School Crane notice confirms its construction that year: “A toboggan slide is being constructed behind the tennis courts. The starting platform will be of wood, jutting over the hill just north of the courts. The course will begin here and stretch down over the hill into the lagoon. This sport will be greatly enjoyed by all of us.” Perhaps Cranbrook School students were inspired by the Olympic debut of the skeleton event that year in St. Moritz, Switzerland? 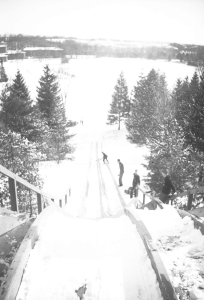 Whatever the impetus, by the late 1930s, photographs show a different structure in a decidedly different location, suggesting the 1928 run had been replaced. Following more closely the natural contours of the hill, this toboggan run appears to have started by the Institute of Science and run in the direction of Kingswood Lake, through the existing tree line. A map in the archives refers to this area as “Suicide Hill.” Could the toboggan run have helped earn the hill its name? This image certainly shows an exhilarating ride.

A February 1945 Cranbrook Schools Crane story corroborates the building of a second run: “The toboggan slide, built six or seven years ago…” The article goes on to report that outsiders had begun using the slide at all hours of the day and night, and so Cranbrook Foundation took steps to prevent unsupervised use by erecting a padlocked fence around the upper half of the runway. “The slide is to be used only when a reliable person is in charge.”

While the first toboggan slide featured in a February 1929 Cranbrook School outdoor party, to which a few girls were invited, a picture of the second toboggan run in the 1938 Kingswood yearbook Woodwinds implies that it was with the construction of this run that girls were now really participating in the fun. Just how much in its early years is unclear, since tobogganing is not part of the 1939-1940 Kingswood list of social activities along with other winter past times, such as ice skating (Kingswood School Records, 1930-1985). But, by 1944 its popularity seems assured. The December Sports News section of  The Clarion announces the outdoor sports opportunities once snow made them possible: skiing, skating, and tobogganing. A couple of years later, the toboggan is still a prominent winter activity of Kingswood students, as a December 1946 issue states, “Until the snow and cold weather comes, the winter sports group will walk. However, when snow and ice really arrive, this group will toboggan, skate, and ski.” And again, in Dorm News of the March 1947 issue, the slide is mentioned as an example of one of the perks of being a boarding student: “Another advantage that we have is that we can use the toboggan slide on Saturday and Sunday afternoons as well as during sports periods.”

How long the second toboggan run was in use is uncertain. A February 1948 Clarion issue shows a photograph of sophomores tobogganing right outside Kingswood School, and by 1949 issues, tobogganing (along with other winter outdoor activities) is no longer mentioned. Other images in the historic photograph collection show that in 1955 Cranbrook students were sledding on the hill from Cranbrook Art Museum to Cranbrook House, with no toboggan slide in sight. It would seem that the days of the toboggan run were over.

It’s important to note that these gaps in documentation of the toboggan runs illustrate the challenge often faced in understanding our past. Accurately recreating historical events relies solely on available facts (written, visual, or verbal). Do you have evidence of the operation of a toboggan run at Cranbrook? Help supplement the historical record and let Cranbrook Archives know!

One thought on “Tobogganing at Cranbrook”