Oliver LaGrone (1906 – 1995), was a sculptor, poet, educator, and humanitarian; he was also the first African-American student at Cranbrook Academy of Art.

Clarence Oliver LaGrone was born December 9, 1906, in McAlester, Oklahoma Territory, to Lula Evelyn Cochran and William Lee LaGrone. William was a minister at the African Methodist Episcopal Zion Church, and an avid writer. He raised Oliver to appreciate education and his African-American heritage. As Oliver later told a reporter from the Albuquerque Journal (Cranbrook Archives):

My father was a gifted writer, and also a builder, and extremely creative. He regaled us with his poems. I was brought up in an environment like that.

In 1928, Oliver attended Howard University in Washington, D.C., where he studied English and economics, planning on becoming a lawyer. He left school in the summer of 1929 to help his family with their move to Albuquerque, New Mexico. After his father passed away in 1930, he chose not to return to Howard, and in 1934 he began to attend the University of New Mexico. He worked as a teaching assistant to architect-sculptor, William Emmet Burk, Jr.

Oliver graduated from the University of New Mexico in 1938 with a Bachelor’s Degree in sociology and fine arts. He was among the artists employed by the Federal Works Progress Administration (WPA). In 1937, he created his sculpture Mercy for the Carrie Tingley Children’s Hospital.

It was in Albuquerque that he met and married Irmah Cooke, September 21, 1938. During the 1940 census, Oliver, Irmah, and newborn baby Lotus Joy were still living in Albuquerque, where Oliver was working as a mail carrier. However, later in 1940, the family moved to Michigan.

In the fall of 1941, at his wife’s encouragement, Oliver began studying with sculptor Carl Milles at Cranbrook Academy of Art. His tuition was covered by a scholarship from the Student Aid Foundation of Michigan. In March 1942, Oliver won a McGregor Fund scholarship for advanced study in sculpture. 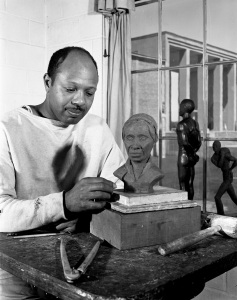 Oliver LaGrone in his studio at Cranbrook Academy of Art circa 1942 with a model of his bust of Sojourner Truth. Courtesy Cranbrook Archives.

Upon completing his studies at Cranbrook, Oliver worked a variety of jobs in order to support his family. Because of an old injury, he was not able to enlist in the Army during World War II, but in the 1940s, he worked for Ford at the Detroit Rouge Plant. It was there he came into contact with the United Auto Workers, whom he worked for from 1943 to 1948.

Oliver participated in the renaissance of black artists in Detroit. During this time he wrote his first poetry, gathering them into a collection, Footfalls (1949).

Footfalls: Poetry from America’s Becoming by Oliver LaGrone. Courtesy Between the Covers.

During the McCarthy-era Red Scare, Oliver was asked by the Detroit Loyalty Committee to act as an informant and provide “communist” information on his contacts in the art world, particularly Paul Robeson. Oliver refused, lost his UAW job as a result, and had to sell pots and pans door-to-door to make ends meet.

He returned to school, attending Wayne State University from 1956-1960 and received the equivalent of a Master of Arts in Special Education. Oliver worked in Detroit Public schools teaching arts and crafts and special education.

Oliver LaGrone in his studio at Cranbrook Academy of Art circa 1942 with some of his works. Courtesy Cranbrook Archives.

Oliver was always part artist, part activist. He served for two years, 1968-1970, on the Michigan Council on the Arts. He served on the African Art Gallery Fund Committee of the Detroit Institute of Arts. From 1964 on, he was a life member of the National Association for the Advancement of Colored People.

It occurred to me early on that you’re not going to be satisfied until you find a way to combine your art with social commentary.

In 1970, Oliver was invited to lecture in art education and Afro-American history at Pennsylvania State University. In 1972, he was appointed Special Assistant to the Vice President of undergraduate education, and in 1975, became artist-in-residence for all 21 branches of the university system. He then served as artist-in-residence at the Hershey Foundation and the Boas Arts Magnet Center for Learning in Harrisburg, Pennsylvania.

Oliver did not limit his creativity to teaching art and creating sculptures. He also wrote and had several poems and reviews published in Negro Digest and the New York Times Sunday Book Review.

Oliver was a longtime Unitarian Universalist and significantly impacted the church and the Harrisburg community by establishing the Oliver LaGrone Scholarship Fund in 1974. Proceeds from the sale of Oliver’s “The Dancer” was an early contribution to the fund.

Oliver LaGrone at work in his studio at Cranbrook Academy of Art circa 1942. Courtesy Cranbrook Archives.

“Oliver LaGrone Day” was proclaimed by the mayors of Harrisburg on February 3, 1980, and again in 1993, in respect for his community contributions.

In the mid-1990s, Oliver returned to Detroit to live near his daughter and her family. Still sculpting and writing poetry, he died in October 1995 at the age of 89. There are two collections related to LaGrone in Cranbrook Archives, one donated by his daughter Lotus Johnson and the other from the Unitarian Church of Harrisburg Scholarship Committee.

One thought on “Oliver LaGrone: Sculptor, Poet, Educator, and Humanitarian”