The Fascinating Notebooks of John Buckberrough

John H. Buckberrough (1874-1955), an immigrant from Ontario, Canada, was a civil engineer for the Cranbrook Foundation from 1927 until he retired in 1955. As described by Henry Scripps Booth:

Buckberrough, a slight man of medium height, started working for Swanson and Booth as that firm’s sole employee two years before Cranbrook officially employed him. That was in the firm’s tiny architectural office located in the below-road-level room of the Ram House section of Brookside’s buildings. … He became one of the first employees of what was known as the Cranbrook Architectural Office in January 1927. … Over the years he was chief surveyor, planned most of the pump rooms, transformer vaults and underground systems, kept copious notes and made detailed plans regarding changes which not only proved increasingly valuable in solving complicated problems but put to shame those who were later supposed to fill his shoes.

In addition to numerous architectural drawings that bear his signature, Buckberrough’s legacy in the Cranbrook Archives is 10 calfskin engineers’ field books, chock full of drawings and notations, covering 1926-1955. 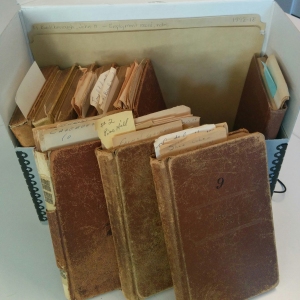 Descriptions and diagrams of Cranbrook property, heating and plumbing data for Cranbrook buildings, data on Cranbrook roads and lakes, drawings of pump houses, sidewalks, lighting layouts and water lines can be found in the notebooks. Here are some examples: 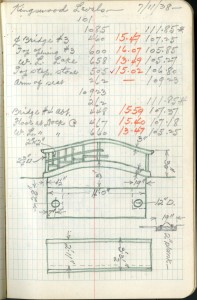 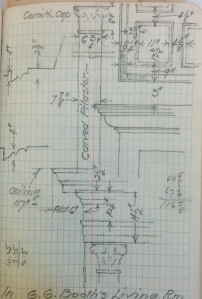 The Archives’ staff often finds valuable information in the notebooks, which is used for campus restoration and renovation projects including the recent restoration of Cranbrook School Quad. Little did Buckberrough know how valuable his meticulous note-taking would prove to be. Though a search for information requires a careful page-by-page hunt, it’s a pleasant change from the impersonality of electronic resources.