Dispatch from the Archives: Documenting Liggett

Part of the job of an archivist is to network with colleagues and provide guidance when neighboring organizations or institutions are looking to establish a new archive.  As luck would have it, two weeks ago I had the pleasure of visiting the University Liggett School in Grosse Pointe Woods to look at their archives, and work with the two stellar Sara(h)s: Sara Day Brewer and Sarah Gaines.  Both women—also current parents at the school—are working to preserve the heritage of the school. 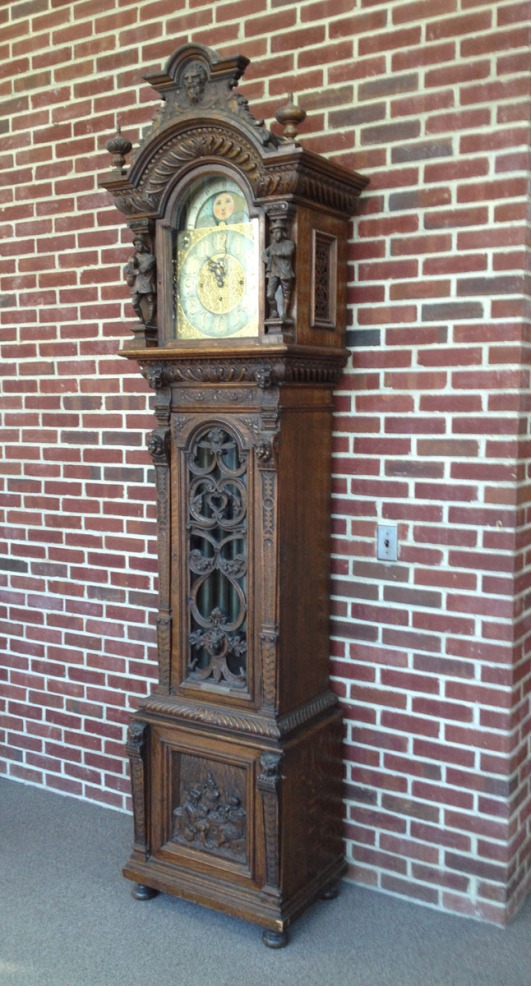 We started out with a tour of the school, where I saw a beautiful hand-carved grandfather clock that was donated to the school by the Farr children in 1950 in memory of their parents, Emma Rothe and Merton Farr.  My mouth dropped open in surprise as one of the Farr children was Carolyn Farr Booth, the wife of Cranbrook’s Henry Scripps Booth!

We then moved on to the archives, which was located in the basement of the school—sadly, a common situation for most archival storage. Though not very large, Liggett’s archival collection contains materials very similar to those we have in the Cranbrook Archives: papers of the founding families, school administrative records, publications, photographs and ephemera.  Continuing the work of a previous part-time worker (who was a trained archivist), the two Sara(h)s have created databases in order to search for objects by subject matter, and are in the process of organizing more of the collection.  My hat goes off to them!

In addition to the Farr connection, there are several other relationships between Liggett and Cranbrook.  Henry Scripps Booth attended D.U.S. and his sister, Grace, attended the Liggett School.  Will Scripps, Ellen Scripps Booth’s younger brother, also attended D.U.S.  Albert Kahn designed Liggett’s Burns Street location in 1914 which was known as Eastern Liggett.  Celebrated landscape architect O.C. Simonds (who designed the landscape for Cranbrook House and the surrounding acreage) drew up a landscape plan for Eastern Liggett in 1916. Detroit industrialist Gustavus Pope was also involved with both Liggett and Cranbrook. Pope, a friend of George Booth’s, was a founding member of the Detroit Society of Arts and Crafts, Vice President of the Detroit Institute of Arts, and President of the Board of Directors for Liggett School. At Cranbrook, Pope served on the Board of Trustees for the Cranbrook Foundation, Christ Church Cranbrook, the Institute of Science, and the Academy of Art.

It was truly a heart-warming experience to see the enthusiasm of the two Sara(h)s and to discuss ways in which they can move forward in promoting their collections.  It is always exciting for me to see new collections, to learn what is around us, and to see how archivists can work together collectively to preserve our rich heritage.

5 thoughts on “Dispatch from the Archives: Documenting Liggett”