Lost and Found in a Sea of Cranbrook History

Every day at the Center for Collections and Research brings new adventures and discoveries. During a visit to one of the storage spaces on Cranbrook’s campus, I stumbled upon a curious object, which inspired me to research it and its past. Like most things around here, the object has a great lineage throughout the campus with connections to George Booth, the Detroit Society of Arts and Crafts, and Cranbrook School.

Henry Brundage Culver worked as an attorney and also served as secretary for The Ship Model Society in New York. He participated in building ship models, and contributed to scholarship on the art of model-making. He produced several publications including Contemporary Scale Models of Vessels of the Seventeenth Century (1926) and The Book of Old Ships: Something of their Evolution and Romance (1924). In the introduction to Contemporary Scale Models Culver compares the art of ship-model building to that of painting.

“The finest examples of these miniature vessels are, in the eyes of those best fitted to judge productions of the highest artistic quality, appealing in general composition, line, mass and technical execution, to the aesthetic susceptibilities of those, who have eyes to see, in a no less degree than do the best examples of pictorial art.”

Originally, the ship was placed in the reception hall of Cranbrook House, and was later loaned by Booth for display in the library at Cranbrook School for Boys. Each of the photographs show the ship on display and its presence throughout Cranbrook. 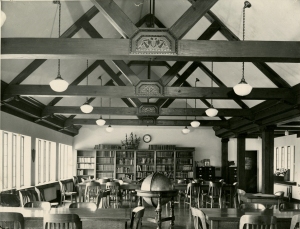