Don’t worry (or sorry!) if you thought this post was going to be about sports teams in the Detroit area. Today’s post is purely about scientific discovery and serendipity right here in Southeast Michigan! Last month local news services reported that the remains of a wooly mammoth had been discovered in Lima Township (Washtenaw County). This prompted me to do some research about these super-cool prehistoric elephant ancestors. According to the University of Michigan Museum of Paleontology, mammoths and mastodons disappeared from this area about 11,700 years ago. Since that time, the remains of about 300 mastodons and 30 mammoths have been found in Michigan.

In 1934, a WPA project was underway when workers discovered bones while using a steam shovel in Bloomfield Hills. The remains, believed to be dinosaur bones by the workers, were brought to Cranbrook Institute of Science for identification. The bones were determined to be those of a mastodon – now known as “The Bloomfield Hills Mastodon.” 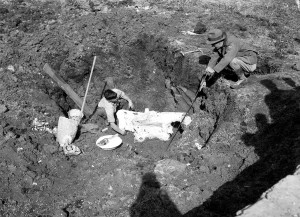 Only the skull with a few vertebrae and ribs were recovered during the excavation of a small pond, which was deepened to form an artificial lake. The bones were uncovered in a residential district about a quarter of a mile east of Woodward Avenue near Charing Cross Road. 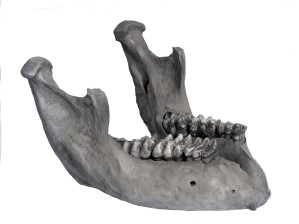 In 1972 a large bone was discovered by a Cranbrook grounds crewman during the process of cleaning up a dump. Warren Wittry, anthropologist and then-CIS director, identified the bone as the central portion of the right scapula of an adult Ice Age mastodon. A”dig” crew was gathered to search for additional bones, but alas only a few additional fragments were found.

Late in 1977, the Institute received an early Christmas present when a partial skull and section of tusk from a young mastodon were discovered by two high school students near Seymour Lake Road in Brandon Township in northern Oakland County. The Institute was very excited about the donation of the bones, which were in an excellent state of preservation. There have been several more mastodon discoveries in Michigan since the 1970s. Personally, I find these stories more interesting to follow than the local sports scene.