With the end of December quickly approaching, we’ve received several holiday image requests. While looking through different collections, I came across these amazing holiday cards that were made by Cranbrook Academy of Art students and sent to Margueritte Kimball (1906-1995).

Margueritte visited Cranbrook for the first time in 1941. She was introduced to Wallace Mitchell, head of the Painting Department, who examined a few of her drawings, and eventually accepted her as a student to the Academy.  She began attending classes in the summer of 1942 and, at the same time began her career as the Academy’s financial secretary — a position she held for twenty-six years.

Known by many in the Cranbrook community, Margueritte became close with students and faculty at the Academy and collected correspondence and student materials from art exhibitions throughout the years. Although she never graduated from the Academy, she did receive an honorary degree late in her life. I hope you will enjoy some of the holiday samples from her collection. Happy holidays! 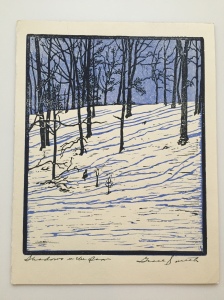 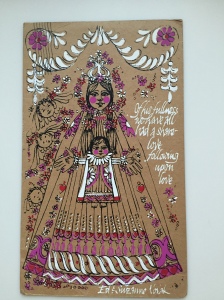 One thought on “Happy Holidays!”