Women’s History month always gives us a good excuse (not that we need one!) to spotlight the accomplishments of some of Cranbrook’s lesser-known but equally important women. They may not have been famous artists or designers, but rather women who educated scores of students, worked tirelessly behind the scenes to catalog thousands of scientific specimens, or played a role in documenting the history and heritage of the Cranbrook community. So this month we have chosen to make each post about a Cranbrook woman – the work she accomplished, an artwork she created, or some other notable fact that we find interesting.

Margaret Elleanor Biggar (1906-1992) was born in Detroit, and became interested in silverwork when she attended spent her senior year in high school at Marietta Johnson’s experimental School of Organic Education in Fairhope, Alabama. After graduation, Biggar returned home to Detroit, where she attended the Detroit Society of Arts and Crafts school. In November 1929, renowned British silversmith Arthur Nevill Kirk (who headed the silver department at Cranbrook), called Biggar and asked if she would like to come and be his student apprentice. She worked for Kirk in the Arts and Crafts Studio until 1931, where she made thirty cents an hour executing and polishing Kirk’s designs.

In 1931, Biggar returned to Fairhope, Alabama in where she taught metals at the Marietta Johnson School of Organic Education and formed a lasting relationship with Elise Hooker (1895-1977), who was head of the school’s craft department. In 1938, the two women left the school to open their own studio where they taught metalcraft classes in silver, copper, and brass. Generous and hard-working, their primary objective was not to make money but rather to teach others the craft they loved. In 1946, they only charged fifty cents for a two-hour lesson! 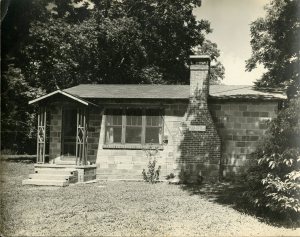 The studio was successful and works of their students were shown in local exhibitions. People came from around the country to take classes, and the studio became a part of local crafts tours in Fairhope.

Metalwork was not Biggar’s only interest. In 1943, she spearheaded the “War Dog Fund” effort in Fairhope. This was a project organized to enlist the help of dogs on the “home front” to secure funds through the donations of their owners. Dogs could be enrolled as a Sergeant ($1) or Lieutenant ($5) all the way up to General ($100). The funds were then used to help feed and care for the dogs in WWII combat zones.