Tapestries – The Fabric of Society

As part of a module assignment for my MA in Archives Administration with Aberystwyth University (Wales), I have been researching a selection of tapestries that George Gough Booth purchased and commissioned from Morris & Co., Herter Looms, and Edgewater Tapestry Looms. I chose the theme of tapestry and time, inspired by Francis Thomson’s idea of tapestry as “mirror of history”. I was particularly interested in the Morris & Co. case study because I much admire William Morris as an artist and social reformer. Although the Morris & Co. tapestries that George Booth purchased were made after Morris’ death in 1896, they were made under the supervision of his former student, J.H. Dearle, who became Art Director in 1905.

George Booth and William Morris shared a zeal for the necessity of beauty in everyday life, and this is of the greatest interest to me, along with the importance placed on humanity in the accomplishment of making a thing that is useful and beautiful. 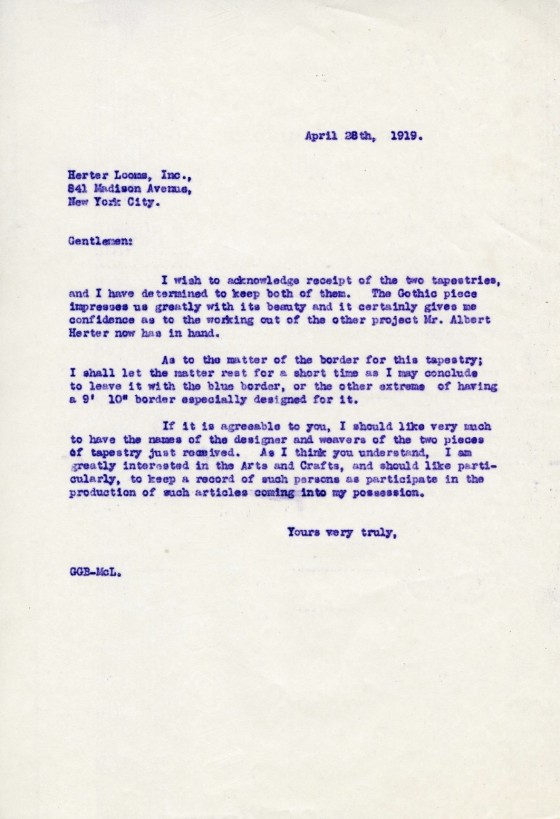 The tapestries embody a mix of modern and medieval in their themes, composition, and technique. The two tapestries for Christ Church Cranbrook (The Old Dispensation and The New Dispensation) are woven in the gothic Flemish technique that Morris & Co. recreated and follow a medieval ‘compartment’ arrangement, but they depict a “modern interpretation of scripture,” as George Booth requested. Morris & Co. also used the same vegetable dyes as used by the Flemish weavers, but these became unobtainable by 1922. David Instructing Solomon is one of the last tapestries made with the old dyes. 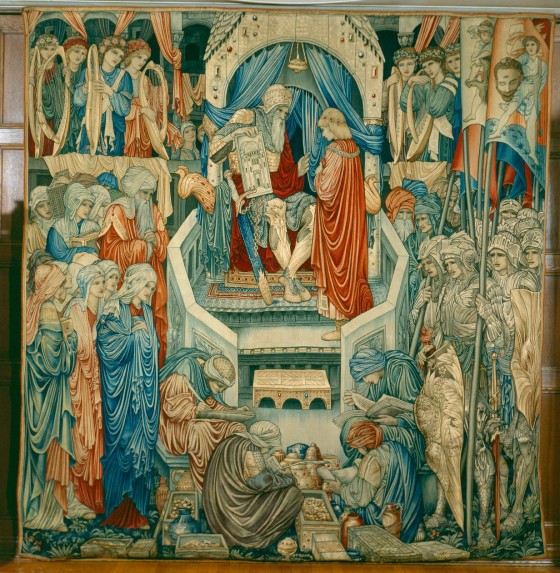 David Instructing Solomon in the Building of the Temple, Morris & Co.

The documents in Cranbrook Archives reveal the creative process and the social context of the tapestries, along with the path from idea to finished tapestry. They also communicate the human struggles that are fixed in time at an individual level, yet shared with all ages. Correspondence reveals the loss of weavers during World War I and the long apprenticeships of new weavers, as well as the aging and planned retirement of J.H. Dearle, and his eventual illness and death (1932) – just as The New Dispensation was completed. Even the type of documents reveal something of their time, communication was by letter and telegram – the instant message of the 1920s.

The archives allow us to see these tapestries as the fabric of society because they uncover the stories of the society that produced them, and their reflection on the valuable aspects of a past society. They now offer much in reflecting on our own society. Having an academic background in law and sociology, I continue to contemplate how history and society shape our individual experience.

3 thoughts on “Tapestries – The Fabric of Society”