Photo Friday: Good Things Come To Those Who Wait

In October 2014, archivist Cheri Gay, wrote a blog on the pet cemetery at Thornlea Studio and the love the Booth family had for their animals.

In the blog, Cheri states, “When Henry was growing up, the Booth family had beagles, Prince and Mike, and a great dane, Ginger. Mike, according to Henry, ‘… loved having a fuss made over him, one time going so far as being pushed around in a doll carriage while wearing a canvas hat.’ Oh to have a photograph of that!”

On this Photo Friday, the Cranbrook Kitchen Sink is proud to present: 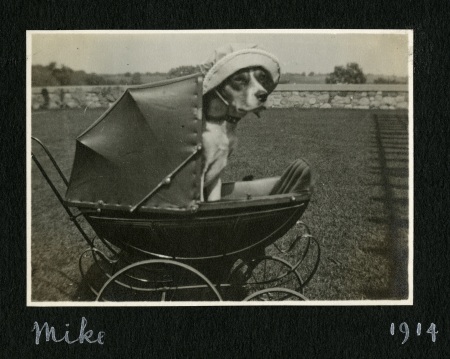 Mike the beagle, being pushed around in a doll carriage… while wearing a canvas hat!

One thought on “Photo Friday: Good Things Come To Those Who Wait”