Curiosity and Wonder: Life at Cranbrook and Beyond

I recently processed the James H. Carmel Papers, a small collection that largely consists of correspondence between Carmel and Cranbrook Institute of Science Director Robert Hatt from 1973 to 1989. It is wonderful correspondence that conveys an enduring friendship across the miles as, after Cranbrook, they lived on opposite sides of the country.

One of the delightful aspects of their correspondence is their enthusiasm for their work, and how the interests that drew them into their professional roles remained with them after retirement. They never lost their curiosity and wonder, or their sense of humor. On a similar note, their love of Cranbrook did not end when they left campus, as they kept up with and discussed new developments that are shared through bulletins and newsletters. I feel sure that many readers of this blog site are just the same. 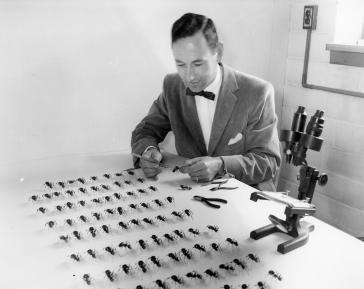 James H. Carmel was the Assistant Preparator at Cranbrook Institute of Science between 1939 and 1942 when he joined the Army Air Corps. He returned to Cranbrook after the war and remained as Preparator, Trustee, and Head of Exhibit Section until 1973, when he moved to California to work for the George C. Page Museum in Los Angeles.

A notable exhibit that was supervised and assembled by Carmel was the Coral Reef Exhibit (1959), which was a reconstruction of the Coral Reef at Nassau made up of approximately 5,000 painted beeswax models. He is the author of Exhibition Techniques: Traveling and Temporary (1962). He died on July 30, 2016, aged 97 years.

One thought on “Curiosity and Wonder: Life at Cranbrook and Beyond”