On Saturday, November 4th, 1978, the first Cranbrook Academy of Art Guy Fawkes Ball was held. The first in what became a long-running series of masquerade balls, it really put the fun into fundraising. The social event, organized by Academy staff and the Women’s Committee, also highlighted the connection between Cranbrook in Bloomfield Hills and its namesake, the village of Cranbrook in Kent, England (from whence the Booth family came) as Guy Fawkes is a well-known character in English history.

Then who, you might ask, is Guy Fawkes? And why commemorate him with Guy Fawkes Night, often locally referred to as Bonfire Night? Cranbrook’s 1978 menu for the Guy Fawkes Ball described it thus:

“An English holiday celebrated with fireworks and bonfires, commemorating the apprehension of Guy Fawkes just before he planned to blow up the Houses of Parliament in 1605. Guy Fawkes’ gunpowder plot originated when James I refused religious freedom to Roman Catholics.”

The menu for the 1978 with the description of Guy Fawkes Night. Courtesy Cranbrook Archives.

The historic tale of Guy Fawkes is set against the backdrop of the religious divisions of sixteenth century England. King James I had ascended the throne only two years prior to the plot after his second cousin, Queen Elizabeth I had died. Elizabeth was born in 1533, the year of England’s break with Rome under her father, King Henry VIII. The thread of history can easily be pulled back from Guy Fawkes to the English Reformation. Yet, much to every historian’s delight, there is no end to the unraveling of history, such that, arguably, the English Reformation was the icing on a cake that was baked in the twelfth and thirteenth centuries. You can read more about the Gunpowder plot here and here.

From an archival perspective, these links are useful in showing how archives can rectify widely held myths (e.g., Guy Fawkes was not the leader of the conspiracy); for thinking about how archives can be used to augment educational programs in schools; and experiencing how the digitization of archival records makes primary sources accessible to scholars and researchers around the world. And speaking of around the world, the Guy Fawkes Worldvue in 1997, saw Cranbrook Academy of Art alumna send postcards from as far as India, Austria, Scotland, Morocco and elsewhere with tales of Guy Fawkes sightings.

And so, back to the Guy Fawkes Ball! The first ball was so successful and entertaining, that another was planned the following year, and another. By 1982, the success of the ball won Roy Slade, President of the Cranbrook Academy of Art from 1977-1995, the title of ‘Commander of the Order of Guy Fawkes’. His collection of records is one of the many collections available for research at Cranbrook Archives.

And the appropriate verse from Mother Goose? It is this:

‘Remember, remember, the fifth of November
Gunpowder, treason and plot
I see no reason why the gunpowder treason
Should ever be forgot.’ 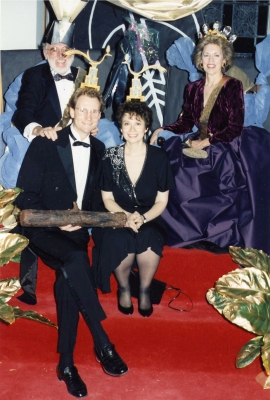 Well, it seems that the plot has not been forgotten more than 400 years later. Here at Cranbrook, the Guy Fawkes Ball became an annual event for a substantial length of time… through the 80s and the 90s until the first decade of the new millennium.