In the main hallway of Kingswood and in the living room of Thornlea, there are paintings by artist Myron G. Barlow (1873-1937). I love the look of these paintings and began to wonder about the artist. I’ve come to learn he was an internationally known Detroit-raised painter. As with all things Cranbrook, it seems, there is always a Detroit connection. 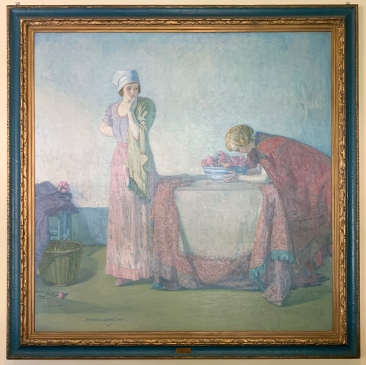 Two Women with a Bowl of Flowers on a Table, circa 1912 by Myron G. Barlow.

The Kingswood painting Two Women with a Bowl of Flowers on a Table depicts two peasant girls, one standing and one bending over a bowl of flowers. It was donated to Kingswood around 1970 by Herbert Sott in memory of his wife Mignon Ginsburg Sott, who was Kingswood Class of 1943.

Young Girl Braiding Her Hair, circa 1912 by Myron G. Barlow

The other painting, Young Girl Braiding Her Hair, is of a girl looking in a mirror braiding her hair. It was purchased by James Scripps Booth from the artist in 1912. James attended the Ecole des Beaux-Arts in Paris and in 1911 had studied under Barlow; James’ painting “Onion Gatherer, Cote d’Azure” depicts Barlow’s cottage studio. James gave Young Girl Braiding Her Hair to his parents George and Ellen Booth. It originally hung in Cranbrook House’s main staircase. George and Ellen gifted the painting to Henry and Carolyn Booth, who hung it in their home, Thornlea.

Myron G. Barlow was born in Ionia, Michigan in 1873 and raised in Detroit. As a teenager, he trained at the Detroit Museum School, where he studied under Joseph Gies, and then at the Art Institute of Chicago. He began his career as a newspaper artist. He eventually traveled to Paris and enrolled in the Ecole des Beaux-Arts where studied under Jean-Leon Gerome.

While copying paintings in the Rijksmuseum in Amsterdam, Barlow discovered Johannes Vermeer. As stated in William H. Gerdts’ Masterworks of American Impressionism from the Pfeil Collection, “Like Vermeer, one of Barlow’s favorite artistic themes became the depiction of figures, often female and usually set in an interior; frequently isolated and motionless, surrounded by a dream-like atmosphere rendered in a single, dominant tonality, often blue.”

Barlow in his studio after 1900. Courtesy of Nancy Brett (Barlow’s great-niece) via Temple Beth-El.

Around 1900, Barlow moved to the French village of Trepied. There he transformed a peasant’s house into his studio. He would, however, make frequent trips back to Detroit and kept a home there as well.

He served as the Chairman of the Scarab Club around 1918. According to his Detroit News obituary, “Among his major achievements in Detroit are six large murals which he painted for the main auditorium of Temple Beth-El, which were completed in 1925.”

In 1907, he was the only American elected to the Societe Nationale des Beaux-Arts and in 1932 was made a Knight of the Legion of Honor by the French Government. He was recognized for his work with gold medals at the St. Louis and Panama Pacific Exhibition, and by having his works purchased by many international museums, including the Musée Quentovic in France, Pennsylvania Academy of Fine Arts, and the Detroit Institute of Arts. The Detroit Club and the private collection of Baron Edmond de Rothschild also included works by Barlow.

In May 1937, he left Detroit with the intention of selling his studio in France and returning to the city for the remainder of his life. Unfortunately, he died in his home in Trepied that fall.