What’s in a Name?

Sometimes, what appears to be a simple question doesn’t have an easy answer in the archives. By combining forces with colleagues, and looking in places you might not first suspect, you can ideally turn a boggling question into a rewarding quest. Provided, of course, you can solve the mystery! Happily, this was recently the case.

When contacted by a Kingswood School graduate about the origins of a certain sculpture that had graced the Green Lobby in the 1960s-1970s, I had two names to go on: Suki and Pam Stump Walsh. Was either of these the name of the sculptor and was the sculpture even still there? After checking several possible sources in the archives, it was time for a field trip to Kingswood. There she was opposite the green stairs, just as she had been described to me: a bronze sculpture of a girl, sitting cross-legged, head bowed, reading a book. I’d answered part of the question: she was still there.

And much to my delight there was also a plate tacked to the sculpture’s wooden pedestal. It read: “In Remembrance, Suzanne Anderson Stenglein, Class of 1947.”

Could this be Suki?

Back in Archives, I found a Suzanne Anderson in the 1947 Kingswood yearbook, Woodwinds. Next to her picture, this description: “That dashing station wagon, that’s always on the go, beautiful taste in clothes, and exciting vacations make Suki the ideal senior for every underclassman. Her pertness, her nose, and her spirit, that help to create her charm, match perfectly her conversational ability on all subjects from Broadway to baseball.” 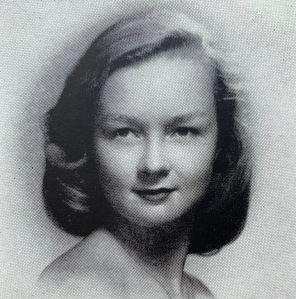 I still didn’t know if this was the sculptor, or if it was Pam Stump, who is perhaps best known at Cranbrook for her work, Jane: Homage to Duchamp in the Kingswood courtyard. It certainly appeared to be Stump’s style. Associate Registrar Leslie Mio found a listing in Cranbrook Cultural Properties records for Suki, described as a patinated bronze sculpture attributed to Pam Stump.

Detroit native M. Pamela Stump graduated from Kingswood School in 1946. After attending the University of Michigan College of Architecture and Urban Planning for one year, she left to study sculpture under Marshall Fredericks in his Saginaw studio. Twenty-three years after leaving Kingswood, Stump, now Pamela Stump Walsh (she married Cranbrook School 1944 graduate, David E. Walsh), returned to teach sculpture. She retired in 1990, but continued creating and showing her own work throughout the state and internationally.

I appeared to have my answer, but I wanted definitive proof, and, ideally, a date. Back to Kingswood School. This time, with the help of Associate Archivist Laura MacNewman, I found the artist’s signature, and, a date!

End of story, right? Not quite. I still wondered about the sculpture’s origins. The Archives, thankfully, hold the M. Pamela Stump Papers. Consisting mainly of her Cranbrook Kingswood Chronicle, a memoir she titled, “Ubi Ignes Est or Where’s the Fire?” it provided the final details.

Stump made eighteen sculptures for Cranbrook while on the Kingswood faculty. Shortly after she started, in 1969, she was commissioned by the Class of 1947 to create a sculpture in memory of their classmate Suzanne Anderson Stenglein, who had died prematurely the year before. Stump refers to the bronze sculpture of Suzanne as Girl Reading or Suki. It was specifically designed to fit in the niche just outside the Headmistress’ office, directly opposite the staircase in the Green Lobby, and purposely placed on a revolving wooden pedestal so it could be turned 180-degrees to face the wall and enable examination of all the various textures and symbols on its surface. Stump writes, “On her body are many symbols of her life. This was easy because I had known her at Kingswood and in Saginaw.” Here you see this symbolism, along with the names of Suzanne’s schools before she came to Kingswood; her initials, S.A.; and her nickname, found on the crown of her head: 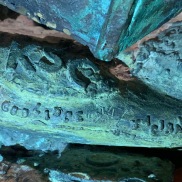 To bring things full circle: a close examination of negatives in the archives collections (identified only as “Kingswood Interiors”) found period images of the sculpture:

I also learned from The Birmingham Eccentric, that Suki was the daughter of Goebel Brewing Company President Edwin John Anderson. She grew up in Saginaw, where she presumably met her husband, Harold Stenglein. The pair were married at Christ Church Cranbrook in 1955, and made their own home in Saginaw. At this juncture, little else is known about the girl behind the sculpture’s name.