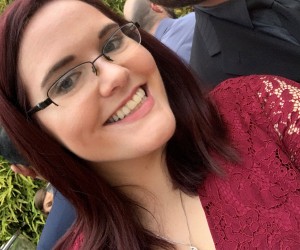 Late in the spring, I was a part of the Eastern Michigan University Historic Preservation Field School hosted at Cranbrook (read about the amazing week here). That week I discovered what a magical place Cranbrook is, and was inspired to ask Cranbrook Center for Collections and Research Associate Registrar, Leslie Mio, about doing my graduate final project here. The Center agreed to have me, so after three years of working hard on my Masters, I’m finishing up here at Cranbrook. I have worked closely with Leslie two days a week since August, mainly focusing on the Smith House and “other duties as assigned.”

The Smith House is a beautiful Usonian Frank Lloyd Wright house (1950) that was owned by Melvyn Smith and his wife Sara. Cranbrook acquired the house by donation in 2017. The main project I have been working on is numbering objects and updating The Museum System (TMS, Cranbrook’s digital database of objects) as we go along. This has been a monumental job: not only did Cranbrook acquire the house in 2017, but also everything that was in it – over 1,800 objects!

Numbering objects isn’t for everyone, it is a slow and repetitive task. But, it gives me a chance to look over the object, confirm that the location is recorded correctly in TMS, make any additional notes about its appearance, and even appreciate the object itself.

My final report for my degree won’t just be about numbering, but about collection management. This is considered the development, storage, preservation, and organization of collections and cultural heritage. I am consulting resources like MRM5: Museum Registration Methods by Rebecca Buck, and Things Great and Small by John E. Simmons, and applying information gleaned to what Leslie and I are doing in Smith House.

Other duties I have had since August: helping prepare a disaster kit for Smith House, so objects and people remain safe in the event of a disaster (especially since it’s off the main campus); meeting with conservators who are helping to restore furniture in the house;  helping prepare for the Center’s fundraiser “A House Party at Cranbrook”; rolling textiles for better storage; and helping move and process new donations.

I say, “other duties as assigned” because one thing I’ve learned in my semester at Cranbrook: the work of a registrar is never boring. We may have our main plan mapped out, but sometimes you must go with the flow.

2 thoughts on “To Protect and (Pre)serve”