In the foyer of Thornlea, the home of Henry Scripps and Carolyn Farr Booth, sits this statue of a burro, Brighty, by Peter Jepsen. He was a gift from their son, Stephen, commemorating a movie project he spearheaded. 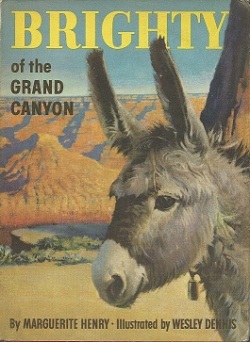 In 1953, Newbery Award winner Marguerite Henry (1902-1999) published the novel Brighty of the Grand Canyon. It tells the story of a real burro named Brighty who lived in the Grand Canyon from 1890-1922. Brighty spent summers carrying water up the canyon to the North Rim. He was rewarded for his work with pancakes. Brighty became popular with visitors, and is said to have accompanied Teddy Roosevelt on one of his three visits to the Grand Canyon.

In 1963, Betty Booth bought a copy of Brighty of the Grand Canyon for her three boys, Douglas, Charlie, and Woody, to read on vacation. Betty was the wife of Stephen Farr Booth, who was a television producer at the time. Stephen read the book and loved it so much he decided to make it into a movie of the same name. The movie premiered in Detroit in 1967.

Movie poster for Brighty of the Grand Canyon. 1967. Courtesy WikiCommons.

To promote the movie, Stephen had commercial artist Peter L. Jepsen (1921-1994) create a life-sized, 600-pound statue of Brighty to be placed in the Grand Canyon’s South Rim’s Visitor Center (it was later moved to the North Rim’s Grand Canyon Lodge, where it resides today and where visitors rub his nose for good luck). Stephen also had 100 small-scale versions of the sculpture made and distributed to various people who worked on the movie. Stephen also gave one to his parents, who placed Brighty right inside the door of their home Thornlea.

We don’t encourage visitors to rub Brighty’s nose for good luck, but he is a fun and memorable addition to welcome guests to Thornlea.

Note: The book, movie, and statue have kept the legend of Brighty alive. Brighty even has his own Facebook page.