A Tale of Two Chairs

When asked, late in life, about the furniture he designed for Kingswood School for Girls, Eero Saarinen referred to himself as “a child of my period.” Two chairs in particular show how the young, precocious designer was able to work in both traditional and modern modes. As designers in the 1920s and 1930s debated the merits of traditional and modern design, Eero worked with both.

He was just 18 years old when he began sketching designs for Kingswood in 1929.  Later that year, he departed for Paris to study sculpture for eight months. These two Kingswood chairs show an understanding of two major European designs trends of the era: the evolutionary Art Deco, with its roots in neoclassical design, and the revolutionary Modern movement, emerging most forcefully out of the German Bauhaus.

First, the Kingswood Dining Hall chairs. These birch wood chairs with painted coral-colored elements and linen damask upholstery are delicate adaptations of the ancient Greek klismos chair. The klismos form, which features curving splayed legs and a concave crest rail, became popular in late-18th-century Europe and America as part of the Greek Revival and the neoclassical style. The form again became a favorite among designers in the 1920s, when its clean lines and soft curves were used throughout Art Deco interiors. Kilsmos chairs were especially fashionable in Scandinavian modern design, with architects and designers like Aino and Alvar Aalto, Gunnar Asplund, Erik Bryggman, and Carl Malmsten producing versions of the chair. In fact, Carl Milles had a set of Malmsten-designed klismos chairs in his Cranbrook dining room. Eero Saarinen’s klismos chairs for Kingswood fit perfectly within the clean lines, rich materials, and Swedish Grace-styling of the light-filled dining hall.

Second, a chair that eschews historic forms for the avant-garde: the chrome plated, tubular steel Kingswood Auditorium armchair. Eero Saarinen’s cantilevered design recalls the furniture coming out of Germany in the 1920s, particularly the work of Marcel Breuer at the Bauhaus. Breuer was a twenty-three-year-old student at the revolutionary German design school when, inspired by bicycle handlebars, he ordered tubular steel from the bicycle manufacturer Adler and built the world’s first tubular steel chair in 1925. Architect and president of the Bauhaus Walter Gropius was so taken with the initial tubular steel chair he invited Breuer to design most of the furnishings for the school’s new modern buildings in Dessau.

END_OF_DOCUMENT_TOKEN_TO_BE_REPLACED

In the spring of 1927, Cranbrook founders George Gough and Ellen Scripps Booth traveled to Egypt. In addition to visiting Cairo and having their photograph taken after an hour long camelback ride, the Booths visited the tomb of the Egyptian Pharaoh, Tutankhamun (King Tut). 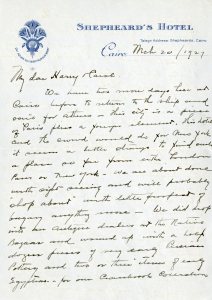 In a letter to his son Henry, Booth describes in detail the opulent beauty of the tomb: “When in Luxor we went to the Valley of the Kings and saw the tomb – that is we saw one room where the King lay. He is there still in one of the gold coffins – the mummy had over it a gold mask covering head and shoulders and many jeweled ribbons of gold covering the joints of the mummy cloth. Thimbles on each finger and toe… this lay inside a gorgeous solid gold coffin inlaid with stones. This was all in the finest carved sarcophagus and that inside a splendid wooden shrine – and this inside of a beautifully decorated room.”

Replica created by Egyptian artisans and purchased by George Booth in 1927. The original chair is in the Egyptian Museum in Cairo. Photograph courtesy of Cranbrook Institute of Science.

The Booths also visited the Egyptian Museum while in Cairo. Booth writes that although there is still a great deal in the actual tomb, he is in awe of the exhibition’s craftsmanship and value. He was particularly interested in a chair that at the time was believed to be the State Chair of Queen Taia, wife of King Amenhotep III (grandfather of Tutankhamun). Booth writes to Henry, “I would cheerfully give $10,000 for the throne –  which is an ordinary sized chair, but beautifully wrought.” 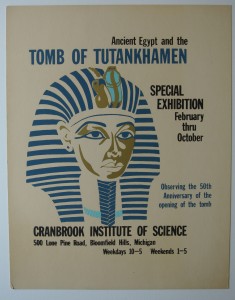 As the original chair was not for sale, Booth commissioned a replica to be made for the Art Museum collection. The chair, of carved wood with relief decorations covered in gold leaf, was later determined to be the chair of Sitamun, an Egyptian princess (and thought by many scholars to be the mother of King Tutankhamun). The chair was lent to the Institute of Science for a 1973 exhibition titled, “Ancient Egypt and the Tomb of Tutankhamen”. In 1984 the chair was transferred from the Art Museum to the Institute of Science, where it still resides today.

To Sit or Not to Sit

Chair design at Cranbrook has always had its own special niche and fascination among artists and patrons alike. George Booth altered chair designs for his own use at Cranbrook House. Eliel Saarinen designed unique chairs for Cranbrook School and Saarinen House. Ralph Rapson conceived of his chair design for what became known as the Rapson Rocker while a student here. Most of us are familiar with the famous chair designers, but what about projects by less famous designers?

During the war years, Academy of Art students were encouraged to experiment with modern design and new and unusual materials. In 1944, Academy students Gloria Bucerzan and Jean Roberts designed and constructed a chair born of war shortages, by eliminating the use of springs and creating webbing using “non-critical” materials. 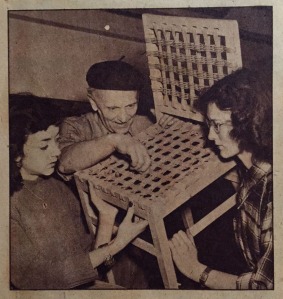 For more on chair design in general, check out the 2012 Year of No-Chair-Design and the Guide to Great Chair Design which features links to chair blogs, the history of chair design, museums, galleries, and books that all feature what else? Chairs!