In November of 1942, Maija Grotell displayed her wares among the latest fashions in the windows of Himelhoch’s department store in downtown Detroit. Grotell, Head of the Academy’s Department of Ceramics from 1938 to 1966, placed her vases, pots, and plates in a stage-set ceramics studio, replete with a painted kiln, bottles of glazes, and a potter’s wheel (made of what appears to be Papier-mâché). 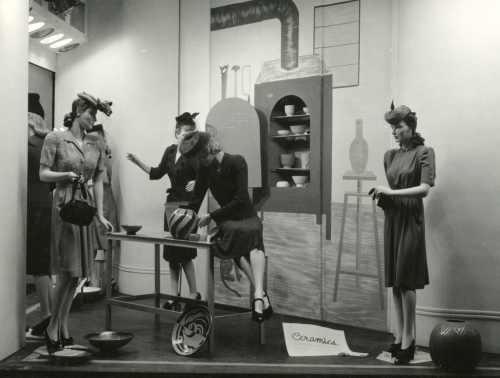 The clothes related directly to the vessels, with the sign reading: “Ceramics: Wonderful Muted Colors To Wear Under Winter Coats Inspired by Maija Grotell’s Ceramic Masterpieces.” Himelhoch’s sold the clothing, while the Grotell works were sold through the Detroit Artist’s Market.

The images are attributed to photographer Joseph Munroe, November 2, 1942.

NB: Himelhoch’s opened in 1907 and was on Detroit’s Washington Boulevard from 1923 to 1977. The lovely building is a National Historic Landmark and survives today as apartments.

What many people do not know is that Albert Kahn had a famous daughter, Lydia Kahn Winston Malbin (1897-1989). She was not an architect, nor a famous actress or TV personality, but was referred to as the “First Lady of Modernism” in a 1984 Detroit News magazine article by art critic Joy Hakanson Colby. Malbin, a lifetime trustee and honorary curator of the DIA, chairman of the Detroit Artists Market, and a member of the Detroit Arts Commission, was also a student at Cranbrook Academy of Art in 1934 and then again from 1940-1944 when she received her MFA in Ceramics. (Malbin took additional ceramics classes with Maija Grotell and painting with Zoltan Sepeshy through 1950.)

But what she was best known for was her vast collection of modern art, an interest that began for her in the 1930s and continued throughout her lifetime. This week I received a query from an art auction house in London, England. They have a work by German-American painter, Lyonel Feininger, that had once been in Malbin’s collection and was on display in a 1951 exhibition at Cranbrook Art Museum called “The Collection of Mr. and Mrs. Harry Lewis Winston.” (Winston was Lydia Kahn’s first husband.) As auction houses often do, they wanted to verify that Feininger’s painting “Becalmed” had indeed been in this exhibition. As I researched this work, it reminded me of Malbin’s additional connections to Cranbrook.

Not only was Malbin a student at the Academy of Art, she was also one of the six Cranbrook-related artists who contributed to the Saarinen-Swanson Group, an affordable, coordinated line of modern home furnishings, which debuted in 1947. Malbin designed the oven-ware pottery, manufactured by Frankoma Pottery Company, and china with glazes meant to “simulate the quality and color of semi-precious stones” manufactured by Glenco Porcelain Company. She also designed ash trays and vases – a line of “red ware” – which featured clay and glazes from Ferro Enamel in Cleveland, Ohio. 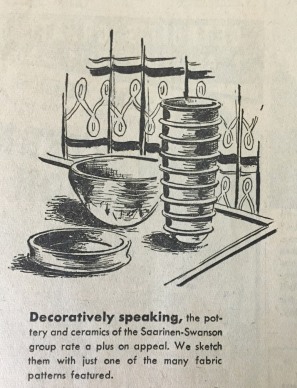 Malbin began collecting modern art in the 1930s. Though her father, Albert Kahn, couldn’t stand modern art, he did instill in all of his children the lesson that they should be independent thinkers. So, Malbin sought out what SHE liked – “tough, off-beat things” rather than popular artists or “pretty pictures.” She and her first husband, Harry Winston, were an art collecting team until Harry’s death in 1965, and Malbin’s second husband, Barnett Malbin, while not a collector himself, supported her collecting activities and even made photographic records of her art for her archives.

Out From the Shadows #1: Myrtle Hall

While most everyone equates the names Saarinen, Knoll, and Eames with Cranbrook, there are hundreds, if not thousands, of people who have contributed to the community whose stories have never been told. We archivists thought it would be interesting to tell some of their stories here.

The first is Myrtle Hall. She was not an alumna, faculty, or staff at any of the Cranbrook institutions, however, she did work at the Academy of Art as a model for drawing and painting students in the late 1930s and early 1940s. Not much is known about the models – there are no employee files for them, and their names are not listed in reports or meeting minutes. Fortunately however, I did uncover evidence that a line-item, established in the budget for the Academy of Art’s 1934-1935 academic year, specifically provided funding for the life models for the drawing and painting classes (taught by Wally Mitchell.) Models worked twenty-one hours per week. 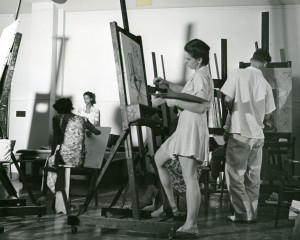 By her own admission, Myrtle was the “first black model at Cranbrook” and for that matter, the first black model in the Detroit area including at the Meinzinger School of Art. In addition to modeling, Myrtle was also an artist herself and a member of Detroit’s Pen and Palette Club, which was formed in 1925 by the Detroit Urban League to help young artists exhibit their works. In 1935, Myrtle received an award for one of her paintings at the club’s Ninth Annual Exhibition. She also studied for a time at the Society of Arts and Crafts, exhibited at the Detroit Artists Market, and was one of the founding members of the Extended Arts Gallery (1958). During the 1940s, Myrtle abandoned painting and became an accomplished ceramicist. She had her own pottery studio (which she designed herself) on Erskine Street in Detroit. The studio was filled with antiques, paintings and sculpture by Michigan artists, as well as her own ceramics and of course her kiln and glazes. In a 1963 interview, she stated “I can’t stand things that are useless” and her oven-to-table casseroles, salad bowls, drinking mugs, and lamp bases reflected just that. 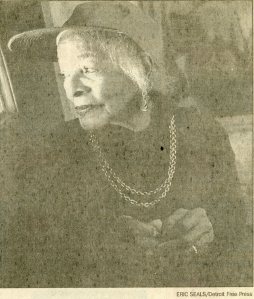 A 1994 article in the Detroit Free Press also tells the story of Myrtle Hall as a quiet but effective activist. She stood up for civil rights when she saw injustice, and was instrumental in affecting a change in Meinzinger Art School’s discrimination of African American students after World War II. Myrtle Hall is quoted as saying “I didn’t just model, I noticed things.”

Editor’s Note: We do not have any biographical information on Myrtle, but if you know anything about her, please let us know!

One of the best things about being an archivist here is learning about the amazing people connected to Cranbrook’s history. Part II of our posts for Women’s History month focuses on Luella C. Schroeder (1918-2004). In 1946, Schroeder was hired as an Assistant Preparator at Cranbrook Institute of Science. A woman of many talents, she worked at a book binding studio in Delaware and as a draftsman during World War II for Chrysler before taking the position at CIS.

Schroeder’s college studies were divided between the natural sciences and art. She later studied photography – a skill she relied on heavily at CIS – as the photographer of the Institute’s collections and exhibitions. A member of the Photographic Guild of Detroit, she was one of 100 photographers to be awarded a prize in Popular Photography magazine’s 1957 photo contest.

In addition to her photography work, Schroeder created dioramas and models for exhibits and taught lapidary classes. Her love of nature was evident in her creations for the Institute – from plant life to insects to bee hives. In 1954, she built an elaborate hive illustrating the lifecycle and production cycle of bees. Her work was admired and praised by her colleagues and visitors alike.

After working at CIS for 12 years, Schroeder left her position in 1958 to pursue her hobby of silver jewelry making. She fell in love with Vermont, and moved there to devote herself to her craft. In a 1961, Times-Argus article she was quoted, “I wish I could tell you why I love Vermont, maybe it’s because it is the last stand of the rugged individualists – the one place where people still really make their lives for themselves.”

Schroeder’s hobby became her life-work. She credited the Institute in making her jewelry more creative (due to her ability to cut gems which she learned while at CIS). Her work was on display at several museums nationally and abroad, and was exhibited at the 1964 World’s Fair. In 1965 she created a pin she titled, “Forged Sunburst.” America House re-named the pin “Solar Flair” in an advertisement in New Yorker magazine and Schroeder was deluged with orders. 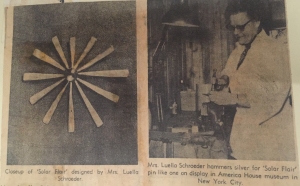 Several pieces of Schroeder’s work were selected by the American House retail store in New York, which is sponsored by the American Craftsman Council. Her jewelry was also marketed by the Detroit Artist’s Market and the Boston Society of Arts and Crafts. In 1985, the Vermont Handcrafters bestowed a Lifetime Membership to Schroeder for her dedication to Vermont Crafts. Clearly her work and dedication made an impression on many – including the Cranbrook community.