“Science and Art are not only for the scientist and the artist, but are for everyone who longs to enrich himself with true cultural interests.”

Astronomy was included in the curriculum at Cranbrook School from its beginning in 1927. Judge Hulbert was chairman of the Observatory Committee and, with Prof. Curtis of the Astronomy Department at the University of Michigan, pursued plans to create a school observatory in what is now called Hoey Tower. The tower conditions were not conducive to keeping a telescope and an alternative location was sought. Consequently, an observatory was included in plans for an Institute of Science designed by George G. Booth in 1930 and the telescope was moved there. William Schultz, Jr. supervised the relocation of the telescope. Schultz was a general science teacher from 1930 to 1969, and Head of the Science Department at Cranbrook School (1938-1965). He was also an Associate in Astronomical Education with the Cranbrook Institute of Science from 1945. You can read more about the history of Cranbrook Observatory here.

By 1932, it was clear that expansion and a new CIS building was necessary. Eliel Saarinen designed the second building between 1936-1937, and it was dedicated in 1938. The CIS Newsletter of April 1937 reported:

“Even in its uncompleted state one is impressed by the beauty of the new building—the sheer simplicity of the architecture, the artistry of its mathematical precision. One feels that it not only embodies the spirit of a scientific institution in its severity of line, but that the details of design give it a unique individuality. From the empty air, as it were, Mr. Saarinen has created one more evidence of his architectural genius.” (Aimee S. Lambie (Ed.), CIS Newsletter, April 1937).

The newsletter also reported the addition of a Copernican planetarium, a gift of Mrs. George G. Booth. The planetarium was made to order in Munich, Germany. 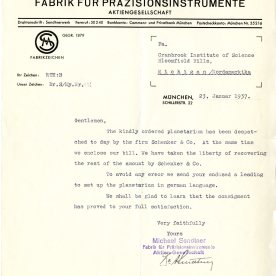 In the spring of 1953, the Astronomy program began to include demonstrations of the constellations on the inside of the observatory dome, using a star projector designed and built by William Schultz, Jr. Schultz was already using the projector to teach astronomy in general science class at Cranbrook School because it produced, “an amazingly good illusion of the starry heavens”. Developed with a materials cost of 45 cents, Schultz’ innovation was a distinguished addition to the astronomy program, but it also created the impetus for a facility and a projection instrument of wider application. 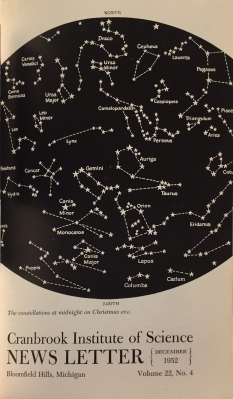 Cover of the Cranbrook Institute of Science Newsletter, December 1952

In June 1953, the Committee on Education made a proposal for the purchase and installation of a Spitz Planetarium to the Annual Meeting of CIS Trustees. In December the same year, L. James Bulkley and Dr. Robert McMath were appointed and authorized to act as a committee of two to pursue the Spitz Planetarium. During 1954, CIS Trustee William Edward Kapp drew up architectural plans for the Planetarium addition at no fee as his contribution to the project. The Spitz Model A-1 projection instrument was also obtained, a gift of Detroit Edison Company. The construction contract was awarded to Killfoile-Wendeln Construction Co. and groundbreaking took place on March 30, 1955.

Construction went on through the summer of 1955. The Planetarium was formally dedicated on September 30, 1955, with an Invocation by Rev. Robert L. DeWitt, remarks by Mr. Kapp, a dedication address by Dr. Alexander G. Ruthven, President Emeritus of the University of Michigan and Institute Trustee, comments by Dr. Robert McMath, and demonstration by Armand Spitz, the designer of the projector.

Between 1956 and 1971, there were 17,289 demonstrations in the Planetarium and it was time for a new projector. Schultz supervised the renovation of the planetarium, which reopened in October 1973 with a new Spitz 512 Planetarium instrument. The planetarium has since undergone further renovation and upgrades, courtesy of the Michael and Adele Acheson family. You can learn more about astronomy and the current programs at the Acheson Planetarium here.

“The planetarium reproduces the great panorama of the heavens, supplementing the telescope, which provides the intimate view… [It] is a successful adjunct to other forms of teaching science, from elementary to university levels, and to the study of navigation, mythology, literature, and spherical trigonometry. But it is above all a useful, ever-ready device for aiding people of all ages and degrees of education to study the sky around them and to set them thinking in terms of a “master plan.” (Robert T. Hatt, March 1956, CIS Newsletter, Vol. 25, No.7.)