Photo Friday: A Splash of Color 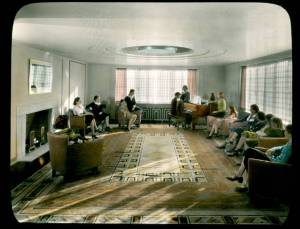 As the weather here at Cranbrook is more than a little dreary, today’s photo provides a look into a bright and cozy atmosphere perfect for reading, relaxing and being inside. Taken around 1932, it shows a group of students gathered in the lounge of the Kingswood School dormitory (originally known as Reception Room III) listening to two of their peers play the piano. The photograph comes from Cranbrook Archives’ Hand-Colored Lantern Slide Collection. The photographs in this collection were originally black-and-white and were painted with watercolor years later, and not by the original photographer. This jump in time explains the vibrant color choices in the photograph as the painter was not present when the image was originally captured.

The Cranbrook Hand-Colored Lantern Slide Collection contains over 30 images of Cranbrook institutions taken primarily during the 1920s and 1930s. Several of the original black and white images were taken by architectural photographers for inclusion in publications.

Today’s photo was taken by George W. Hance, Cranbrook’s first paid staff photographer (1931-1932). Hance had been commissioned by George Booth as early as 1916 to photograph his art collection and later photographed Cranbrook’s campus and grounds including Kingswood, Cranbrook House (home to George and Ellen Booth) and Thornlea (home to Henry Scripps Booth). Explore more photographs like these on our digital image database or in person at the Archives!