While researching an archival query this past week I discovered yet more hidden gems in our collection—the work of metalsmith Richard Thomas (1917-1988). Thomas held several positions at Cranbrook, including Head of the Metalsmithing Department, Dean of Students, Registrar, and Administrative Assistant to the President. The Archives has a small collection which documents many of Thomas’ private commissions.

One of the key works he created for Cranbrook was the Ceremonial Mace (1978) at the request of the Cranbrook Educational Community. Traditionally, the Christian processional cross had been carried at Cranbrook and Kingswood Upper School graduation ceremonies, but by the 1970s, upper school students objected to the fact that the cross did not accurately reflect the religious beliefs of the diverse student body. In 1973 and 1974, Kingswood head, Wilfred Hemmer, moved the cross from the front of the processional to the rear, then in 1975 agreed to remove it from the ceremony altogether.

After Hemmer’s resignation in early 1976, acting head Christopher Corkery reinstated the processional cross and a student protest ensued. Letters to the editor were written to both upper school newspapers and four Kingswood seniors refused to attend the Kingswood commencement. By May, ten percent of the student body threatened to boycott the ceremony.

Thomas’ design of the Cranbrook Mace incorporates symbols of four major religions: the Christian cross, the Star of David, the Crescent of Islam, and the symbol of Yin and Yang which represents the Eastern philosophies of China, Japan, India and Indonesia. The seals of the Cranbrook institutions are also a part of the design of the mace, which is made of rosewood, ivory, steel, sterling silver and gold.  The Cranbrook Mace is still used in graduation ceremonies to this day. 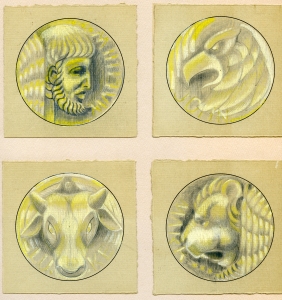 In 1981, Thomas was awarded the Cranbrook’s Founders Medal. His design and fabrication of liturgical objects can be seen in more than ninety churches, synagogues, and temples across the country. He designed the Cranbrook Foundation’s silver punch bowl, the Saarinen Medal, and the commemorative medal for the Academy of Art’s fiftieth anniversary.