A colleague recently inquired about a painting on the mezzanine wall leading to the music practice rooms at Kingswood School. The painting is of a girl, “Kitty Kingswood,” who is holding a pennant and is accompanied by a swan on the waves of Kingswood Lake. Eliel Saarinen painted the image in the 1930s to camouflage clay sewer pipes. 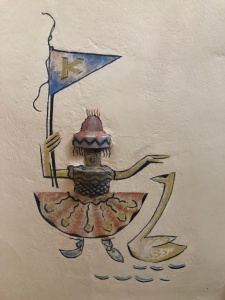 In 1950, Lillian Holm (Head of Weaving at Kingswood School from 1933-1965) copied the pattern of the gown from the painting and Louise Raisch hand-wove the first Kitty Kingswood doll. This doll was auctioned at the 1950 Autumn Festival. 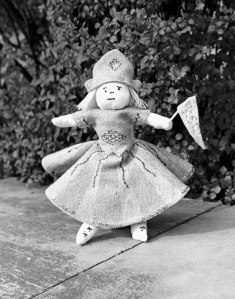 Is there more to the Kitty Kingswood story? A recent trip over to the Girls Middle School, as well as a dive into our files here at the Archives, indicates that there is much more—and the iconic Kitty still plays an integral role.

Fast forward to 1964. The Kingswood Alumnae Association presents a new award to a seventh or eighth grade girl who has contributed to the spirit of Kingswood and is an outstanding citizen. The Association commissions Kingswood sculpture teacher, Pamela Stump Walsh, to create a statue of Kitty Kingswood for the award. The Birmingham Eccentric describes the sculpture as “a typical KSC girl who holds a hockey stick and a pennant and stands on the KSC seal.” 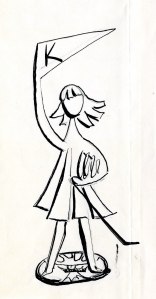 Today, the statue resides at the Girls Middle School as does a plaque (also donated by Pamela Stump Walsh) with the award recipients’ names. An additional case at the middle school displays a Kitty Kingswood doll, which was reproduced and auctioned off for many years to raise funds for the school. 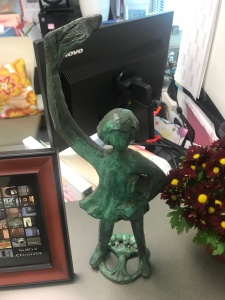 The Kitty Kingswood Citizenship Award is still presented to an outstanding student each year at the Girls Middle School. The award is determined by vote of the faculty. Pamela Stump Walsh presented the award to the first recipient in 1964, and her words still inspire students today: “Good citizenship is more than simple obedience to a set of rules or laws. It is a loving obedience to just laws and the courage to change the unjust…but most of all, it is serious concern for the condition of others, even for the condition of our enemies.”

4 thoughts on “The Iconic Kitty Kingswood”