Most high schools have a lot of clubs in order to foster the interests of their students. Since opening in 1927, Cranbrook School for Boys has had its fair share of extracurricular activities. There has been a Biology Club, a Pre-Med Club, and a club for the boys that had earned their Varsity letter (called the “C” Club). But, there have also been some clubs that were not so traditional.

Amateur radio, also known as ham radio, was quite popular at one time. The boys at Cranbrook started their own Radio Club with the help of Science teacher William Schultz, Jr.

Radio Club members listening to the radio, July 1935. You can see the station’s call sign on the wall: W8LME. Photograph by Harvey Croze. Courtesy Cranbrook Archives.

Then there was the Model Club, which was for boys who enjoyed making models, judging from the picture, mostly of airplanes.

A Drama Club is not an unusual thing to have at a school, but Cranbrook’s club has an interesting name: Ergasterion Club. Ergasterion is the Greek name for the workshop of craftsman. 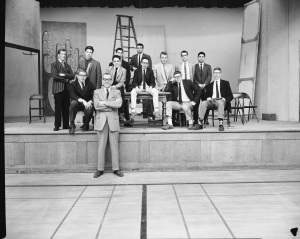 I guess a Rifle Club is not that unusual either, but their yearbook photo was just too great not to share!

In the great state of Michigan, we have a lot of lakes. That is what must have inspired the creation of the SCUBA Club. 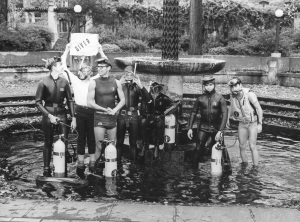 Today, Cranbrook Schools (co-ed since 1984) continues to have a wide variety of extracurriculars; just ask the members of “The Beyond Earth Club (Space Club)” or the Namtenga Club.