Birds of a Feather …

“… the Cranbrook Foundation, dealing with things material and visible, rests in turn upon another foundation made up of things invisible – that is, of thought, vision, and ideals… No product of human hands exists which was not a thought before it became a thing.”
Rev. Dr. Samuel Simpson Marquis, “The Laying of a New Foundation for Cranbrook Institutions,” Commencement Address to Cranbrook School, June 6, 1936

The thought, vision, and ideals of George and Ellen Booth endure in the cultural community and architectural landscape that we enjoy today. One of the great joys of working in the Archives is witnessing the documentary heritage which traces the stories of the people, places, and things that contribute to Cranbrook’s history. All record types — from correspondence, financial records, and reports to written and oral memories and reflections — provide a different insight into the process of making an idea a reality.  I am particularly fond of architectural records, because it is possible to see the built campus in its earliest form. Cranbrook Archives holds a large collection of architectural drawings for the entire Cranbrook Educational Community, as well as for  projects of Cranbrook affiliated firms and architects. The drawings are arranged by division or creator and housed according to their format. One format that is housed separately are detail drawings, which include millwork details and decorative designs. They are pencil on tissue drawings preserved folded in their original envelopes, many for almost a century. I would like to share with you an example of this type of drawing, one that documents the birds sitting atop of the columns of the aisle wall stalls at Christ Church Cranbrook. 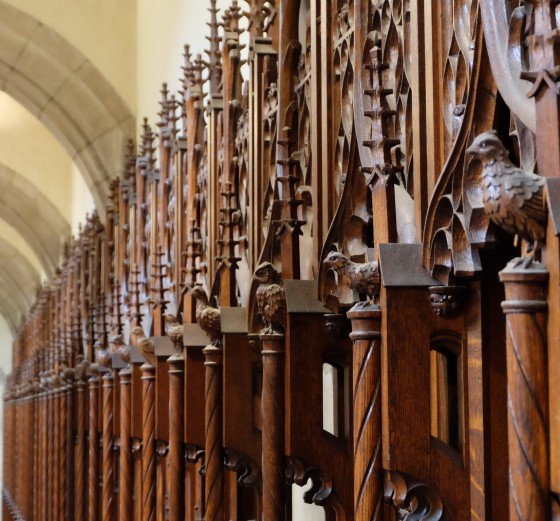 View of the aisle wall stalls at Christ Church Cranbrook. Center for Collections and Research.

Finding sources in an archives depends upon the arrangement and description of the collections. Because of their very nature, sometimes a fair amount of detective work is required when the material being described is a visual format. Architectural drawings that have been catalogued are searchable using the Cranbrook Academy of Art library catalog, so the search most often begins there. In my case, a search for the wall stalls at the church returned seven results, none of which refer to the birds specifically. Yet, one of the descriptions suggested that there was great potential that it would include a drawing of the birds and, indeed, that is what I discovered. 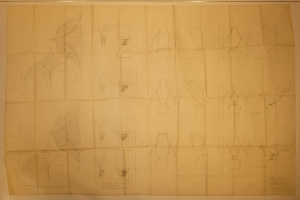 The discussion between George Booth and Oscar Murray about the design and contract for the stalls began in early December 1929 and the stalls, carved by Irving and Casson, arrived for installation in August 1930. Booth left it to Murray’s judgment as to whether to have a continuous row of the same model for the columns or whether to include the variation. As you can see, this drawing includes two variants of tracery, four variants of corbels, and six of seven variants of birds, including the swallow, quail, dove, cat-bird, owl, and American robin. The seventh bird yet remains a mystery, leaving us something to discover in the future. Discoveries like these, and helping others achieve similar ones, make the job of a Cranbrook Archivist both enjoyable and rewarding.

[Editor’s Note: When this post was first published, the quote was attributed to George Gough Booth. Subsequent research has revealed that it is from an address by the Rev. Dr. Samuel S. Marquis.]