On the eve of World War II, while Americans continued to suffer from the economic fallout of the Great Depression, the United States Treasury Department’s “Section of Fine Arts” commissioned Zoltan Sepeshy, the Head of the Painting Department at Cranbrook Academy of Art, to paint a mural for a new post office in downtown Caro. At the same time, one of his star students, David Fredenthal, was commissioned to paint a mural for the new post office in Lincoln Park. (Having trouble placing Caro, if not also Lincoln Park, on a map of Michigan? For your first geography lesson, place your right hand, palm side up, next to you. Caro is located in the middle of your thumb, while Lincoln Park is closer to your wrist.)

Separate and distinct from the more extensive and influential WPA or Works Progress Administration’s “Federal Arts Project,” which essentially was a work-relief program for artists, the purpose of the Treasury Department’s “Section” program, as it came to be known, was “to secure for the Government the best art which this country is capable of producing, with merit as the only test.” Sepeshy and Fredenthal, with their recently minted Cranbrook credentials, fit the bill. Fredenthal even had some mural experience, having recently painted an octopus mural for the Academy’s now infamous Crandemonium Ball in 1936.

Meanwhile, Jimmy Southers, Lincoln Park’s postal superintendent, was more than a little perplexed and worried about the mural David Fredenthal was to paint for his post office. The week of September 25, 1939, Southers received a letter from Washington notifying him that Fredenthal, who the government described as a “sensational young artist” from Cranbrook Academy of Art, had been named to paint the mural—a fresco no less. Southers, who more than likely had not paid a visit to the seven-year-old Academy in Bloomfield Hills, not only had no idea what a fresco painting was but was intimidated by the government’s suggestion that he was to confer with the artist about the subject matter. His big idea? He thought a mural showing all of Lincoln Park’s postal superintendents (no doubt with him in a position of prominence) would do just fine.

Fortunately for Southers, geography intervened. Pulling out his own map of Michigan, Sepeshy did some calculations (which I just repeated using Google Maps). Realizing that Caro was some seventy-two miles from his studio in Bloomfield Hills while Lincoln Park was just twenty-six, the Hungarian painter decided to pull rank. He had the commissions switched and assigned the Caro project to his student while he decided to paint the mural in Lincoln Park, a few miles south of Dearborn.

END_OF_DOCUMENT_TOKEN_TO_BE_REPLACED

Metro Detroiters, out-of-town visitors, and architectural aficionados worldwide have long admired the Penobscot Building in Detroit’s Financial District. Like its close neighbor, the Guardian Building, and the Fisher Building further north in Midtown, it is one of the city’s finest examples of art deco architecture and one of the iconic structures that still make up Detroit’s skyline today. Designed by Wirt C. Rowland of Smith, Hinchman, & Grylls, when its 47 stories were built in 1928, it was the tallest building in the city and the fourth tallest in the nation.

The Penobscot, on the National Register of Historic Places, is perhaps best known architecturally for its tiered upper seventeen floors and the exterior ornament by sculptor Corrado Parducci, whose work can be seen on many other Detroit buildings. It’s also known to locals for the red-lit globe at the top (originally designed as an aviation beacon), the legendary Caucus Club (Barbara Streisand reportedly launched her singing career here), or the famed roof observation deck which offered an excellent panorama of the city.

But, what about the interior of the Penobscot? Well it just so happens there’s a Cranbrook connection!

The Guardian Detroit Group was the first tenant of the two-story bank hall at 635 Griswold St. before they had their own skyscraper commissioned just a block away. A later occupant, Detroit City Bank, opened in the same space in February 1949. When they did, adorning one wall was a mural painted by Cranbrook Academy of Art graduate and Head of Kingswood School Art Department (1940-1956), Clifford B. West. Known as the “Mural of Michigan” the twenty-six-foot painting depicts scenes representing state commerce and industry. West, who studied under Zoltan Sepeshy, and with fellow muralist David Fredenthal, had already completed a bank mural in Alamosa, Colorado, as well as Detroit-area murals in the Rackham Building, Stockholm Restaurant, and Fox & Hounds Restaurant. 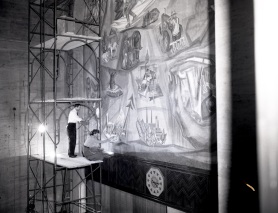 Following a meticulous process that involved a series of sketches at different scales, cartoons plotted to a numbered grid and traced on the wall, and painting in two steps (large blocks of color followed by detail work), the scenes were applied in casein tempera on canvas cemented to the wall. Joining in this process was West’s wife and fellow artist, Joy Griffin West, and several academy students. Fortuitously, each stage of work was captured in a series of photographs by Cranbrook photographer, Harvey Croze.

Upon completion of the mural, West mounted an exhibit at Cranbrook Art Museum titled, Progress of a Mural in April 1949, detailing his process for the Penobscot mural, and featuring many of the preliminary sketches and cartoons.

It’s largely unknown whether the Penobscot mural exists today, since a drop ceiling was installed many years ago, completely obscuring West’s creation.

The Center for Collections and Research’s newest intervention in Saarinen House opens on Sunday, April 28: Studio Loja Saarinen: The Art and Architecture of Weaving, 1928-1942.

In researching the exhibition, Collections Fellow Kevin Adkisson has discovered many remnants of the Studio in the Archives, Art Museum Collections, and on the campus of the Cranbrook Academy of Art. One part of the Studio remains that you’re likely not familiar with: the weaving allegories by Katherine Sibley McEwen (1875-1957), one of the founders of the Detroit Society of Arts and Crafts and a friend of George G. Booth. Her eight allegories and border elements were painted directly onto the ceiling of the former Studio Loja Saarinen Weaving Room — now the studio of Elliott Earls, Artist-in-Residence and head of the 2D Design Department at Cranbrook Academy of Art.

Ceiling murals designed and executed by Katherine McEwen in what was once Studio Loja Saarinen. Each is an allegory of weaving. Photo by PD Rearick.

Winding thread on the bobbin – detail of ceiling murals by Katherine McEwen in what was once Studio Loja Saarinen. Photo by PD Rearick.

Collecting the thread – detail of ceiling murals by Katherine McEwen in what was once Studio Loja Saarinen. Photo by PD Rearick. 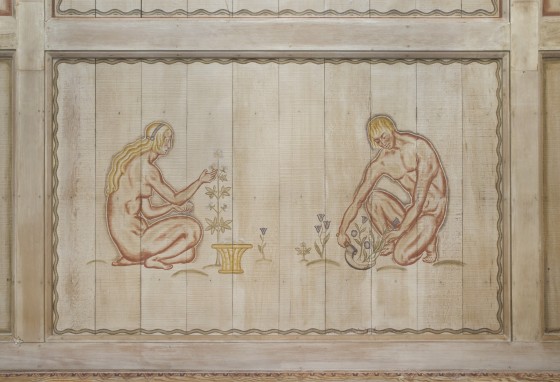 Harvesting cotton and flax (linen) – detail of ceiling murals by Katherine McEwen in what was once Studio Loja Saarinen. Photo by PD Rearick.

Harvesting silkworms and shearing wool – detail of ceiling murals by Katherine McEwen in what was once Studio Loja Saarinen. Photo by PD Rearick.

Detail of the decorative borders by Katherine McEwen along the ceiling of what was once Studio Loja Saarinen. Photo by PD Rearick.

McEwen executed other works at Cranbrook, including the magnificent frescoes at Christ Church and a witty history of education series in the lower level of the Cranbrook School for Boys Dining Hall.

This Sunday, April 28, 2019 from 1-5pm visitors will have the very rare opportunity to see the Studio Loja Saarinen murals as part of the Academy’s Open(Studio) event–just follow the signs to the 2D Department. At the same time the Center’s special Studio Loja Saarinen show will be opening in Saarinen House, incorporating six historic Studio Loja Saarinen rugs and tapestries new to the house, dozens of archival and new color photographs, and a handful of small personal accessories from Loja Saarinen. And, the loom is up and running and Cranbrook Kingswood students will be giving hands-on demonstrations.

If you can’t make it to the opening, the Studio Loja Saarinen exhibition may be viewed on both public and private tours of Saarinen House during the 2019 Tour Season, Friday, May 10, 2019 through Sunday, December 1, 2019.

In a letter to George G. Booth ca 1931, Detroit News Art Critic Florence Davies, writes of artist Hildreth Meiere, “All over the place she discovered these refinements of line, these essential underlying principles of beauty. I have taken many people to Cranbrook, never anyone who saw it with so much understanding.”

Meiere (1892-1961) was a distinguished Art Deco muralist, painter, and decorative artist. Her commissions range from the medallions on the exterior of Radio City Music Hall to the dome in the National Academy of Sciences in Washington D.C. to the reredos panels in St. Paul’s Chapel in Christ Church Cranbrook. Educated at Manhattanville, the Art Students League, the California School of Fine Arts, the School of the Art Institute of Chicago, and in Florence, Italy, Meiere was a renowned muralist, as well as an important figure in the history of American Liturgical Art, and a preeminent mosaicist.

“It drives me wild to be spoken of as ‘one of the best women artists,” Meiere wrote to a friend in 1936, “I’ve worked as an equal with men and my rating as an equal is all that I value.” In 1956, she was the first woman honored with The Fine Arts Medal of the American Institute of Architects. Although it has taken years for her work to be discovered and viewed in its rich cultural context, we are grateful for her artistry here at Cranbrook.

Note: You can view more information and images of Hildreth Meiere’s work here.