Cranbrook, Kent: Then and Now

When George and Ellen Booth moved from Detroit to Bloomfield in 1904, they named their estate ‘Cranbrook’ after George’s ancestral home of Cranbrook, Kent, England. As the institutions and landscape developed, many of them were also named after places in and around the ancestral Cranbrook. George’s father, Henry Wood Booth, was born there in 1837, where his father, Henry Gough Booth, and grandfather, George Booth, were coppersmiths.

In 1901, Henry Wood Booth along with George and Ellen took a trip to England, and the photographs from this trip are held in the Henry Wood Booth Papers in Cranbrook Archives. I invite you on a virtual “walking” tour of Cranbrook, Kent, using these historical images alongside the same places in the present day.

Cranbrook is a small town situated on the River Crane with an industrial history in iron-making, that goes back to Roman times, and cloth-making, stimulated by the settlement of Flemish weavers in 1331. Cranbrook belongs to a group of towns known as the Weald, which comes from a West Saxon word for “forest”. During the middle ages, Kent was divided into seven “lathes” (an administrative unit peculiar to Kent), and Cranbrook was one of seven “hundreds” (the smallest administrative unit about the same size as a parish) belonging to the lathe of Scray.

The map below pinpoints the places that we will visit so that you can follow the route as we tour the town.

Cranbrook is comprised of one main road, the High Street, which intersects with another smaller road, Stone Street. Most English towns have a “High Street,” just like “Main Street” in the US, and we will begin our tour on the High Street that leads into the town center.

View of the High Street looking down to the Town Hall, 1901. Cranbrook Archives. 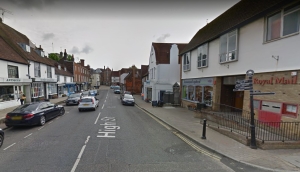 At the end of the High Street, there is a small lane called Crane Lane. The Booth family lived on the High Street nearby this lane. The symbolism of the Crane is well known on the Cranbrook campus and you can see its history rooted in the etymology of the ancestral Cranbrook, which is named for the gathering of cranes at the brook.

This is a bird’s eye view of Crane Lane showing the brook. If you click and zoom out on the map you can see that it leads to a small unbuilt area and eventually to a road named “Brookside”.

3. Turning right onto Stone Street – you can see the George Hotel on the right:

View of Stone Street with the George Hotel on the right, 1901. Cranbrook Archives.

The George Hotel is still there today: 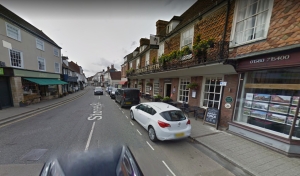 4. At the intersection of Stone Street and Hill Road, which leads to the Union Mill, there was a blacksmith’s shop on the corner. Henry Wood Booth’s birthplace is on the left on Hill Road: 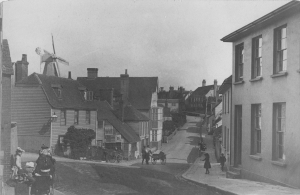 The view today is quite similar:

Union Mill is the last remaining of four smock mills in Cranbrook. It is still used to grind flour which you can see here.

5. Heading back to the center of town, you can see St. Dunstan’s in the distance:

This is the view today: 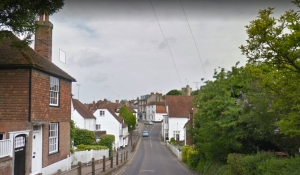 View looking down Hill Road from the site of the mill. May 2019. Google.

You may be familiar with this name from St. Dunstan’s Theatre and St. Dunstan’s Chapel. St. Dunstan’s Church is the parish church of Cranbrook in the Diocese of Canterbury. It is known as the Cathedral in the Weald and, while records show that a church was there almost 1000 years ago, the present building is over 500 years old. St. Dunstan himself is the patron saint of metalsmiths.

In the surrounding area, there are other sites with names that you will recognize from Cranbrook campus, namely Angley Wood and Glassenbury Manor (Kingswood Lake was once called Glassenbury Lake).

I hope you have enjoyed the trip and discovered something new about Cranbrook past and present.

5 thoughts on “Cranbrook, Kent: Then and Now”