Lake|Flato Architects of San Antonio, Texas designed the Cranbrook Kingswood Middle School for Girls in 2011. Like other buildings on Cranbrook’s campus, Lake|Flato designed niches along the main hallway for the display of art. I’ve had the pleasure of helping incorporate art pieces into the building; we always try to add works that enhance the material palette of the building–green glazed brick, Kasota limestone, brown cast-stone block, copper, and light maple.

Philosopher Chimpanzee displayed on a custom mount in a niche at the Cranbrook Kingswood Middle School for Girls.

This summer, the Center for Collections and Research along with Capital Projects installed a work from the Cultural Properties Collection in one of the niches: Philosopher Chimpanzee, by former Kingswood School Cranbrook Sculpture Instructor Marshall M. Fredericks.

Philosopher Chimpanzee is a bronze high-relief of a monkey in a thoughtful pose with a smaller monkey in the background. There is a green patina on the bronze. 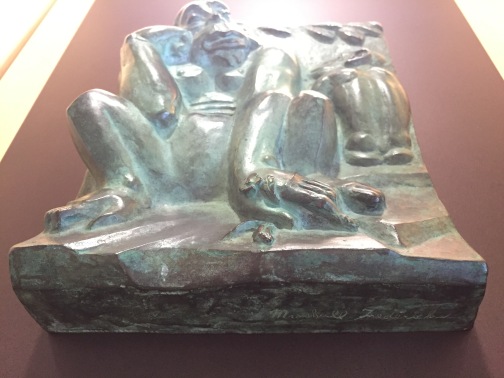 Signature “Marshall Fredericks” on the bottom of the relief

The Philosopher Chimpanzee was done as a part of a series of twelve reliefs by Fredericks. He designed the series for a competition in 1939, hoping they would be installed on a government building in Washington DC, but the building was never built.

The donor of the work, June Lockhart, was a 1938 graduate of Kingswood School Cranbrook. While at Kingswood, her sculpture teacher was Fredericks. Lockhart’s father, Robert H. Daisley, was the Vice President of Eaton Manufacturing Company. He commissioned Fredericks to create a memorial in honor of the employees of the Eaton Manufacturing plant in Saginaw who died in World War II. Daisley bought the Philosopher Chimpanzee at that time, which Lockhart inherited upon her father’s death. She generously gave it to Cranbrook last year, and we are excited for the girls to see it when they return for classes this fall!

The chimp joins the other Marshall Fredericks works on campus, including The Thinker at the Academy (another philosophizing primate), The Pony Express reliefs at the Boys Middle School, and the Two Sisters at Kingswood.

* Fun Fact: One of Leslie’s hobbies is giving tours of Greenwood Cemetery in Birmingham, Michigan, where Marshall M. Fredericks, as well as the Booth family, are buried.

Last spring I gave a presentation about Cranbrook during World War II to the 8th grade history classes at the Girls Middle School. So, when our blogmaster asked for a post this week about WWII, I thought I would share that experience. After working in the archives for more than 14 years, I knew we had a myriad of materials relevant to WWII and I was excited to share these stories with the 8th grade girls. I was hopeful that it would help make a part of history more real to them. I began by asking each class (there were four that day!) how many thought Cranbrook was affected in ANY way by the war? Throughout the day, maybe 8 of the nearly 60 girls raised their hands. While I was surprised, I was also excited to enlighten them.

Other ways in which the Cranbrook community supported war relief efforts included the British Children Refugee program, the Finnish War Relief Fund, and the Red Cross and Victory Book Drives

Cranbrook’s war-related activities were far-reaching – from Cranbrook School boys practicing military drills on the football field to Academy of Art ceramicist Maija Grotell who collected sweaters and unraveled them to repurpose into balls of yarn that she sent to families in Finland. War Bond drives were held at each of the school campuses, the Booth family closed off the west wing of Cranbrook House to conserve fuel due to rationing, and a previous blog post highlights one of Cranbrook’s own Monuments Men.  The 8th grade girls were particularly amused by the photograph of the Red Cross class which was held at Kingswood School, and that girls their same ages had collected waste fat from the school dining hall. There were a lot of “EWW!s”

I told the girls about the war memorial plaque which hangs at the base of Hoey tower and lists the names of all 678 Cranbrook School alumni who served in the war, including the 37 who lost their lives. We talked about the Cranbrook Committee on Civilian Defense and the air raid sirens/drills on campus, and how students from both Cranbrook and Kingswood Schools entertained the troops at Selfridge Air Force Base. 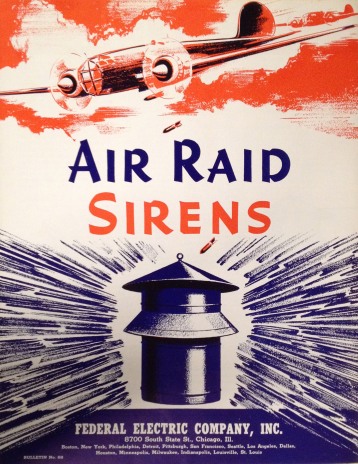 Cranbrook had air raid sirens in numerous locations across campus.

At the end of each class, I asked the girls again how many thought Cranbrook was affected by World War II, and nearly all of them raised their hands. It was gratifying to be able to share primary source documents from our collections to help bring history out of the textbook and onto the campus. I’m looking forward to teaching again this school year!

Archives staff works very closely with the Capital Projects department here on campus and we recently received an email from Project Manager, Craig Hoernschemeyer, about a possible Cranbrook connection with a poster he came across. The poster is of Norwegian Olympic ice skating champion, Sonja Henie, who won the gold medal in 1928, 1932 and 1936 and was also a film star in the late 1930s-1940s. Craig wondered if perhaps Henie could have been sculptor Carl Milles’ muse for the “Ice Princess”.

The first Ice Princess bronze was cast in 1949, making it a relatively late Milles sculpture. Stockholm’s Millesgarden attributes the design to a 1948 visit to Rockefeller Center in New York City. As the story goes, Milles was so fascinated with the skaters he saw at the Rockefeller ice rink, he designed the Ice Princess to match their fluidity and movement.

There are more than 100 Milles sculptures across Cranbrook Educational Community’s campus. The Ice Princess was cast at the Herman Bergman AB foundry in 2012 and was installed in 2013 in the Fisher Cummings Courtyard at the Cranbrook Kingswood Girl’s Middle School.

Rockefeller Center? Sonja Henie? What do you think?