Out of the Ordinary: Cranbrook and the Chair

Last week, I was happy to welcome a small group tour into the reading room to view archival materials about chairs. After the tour request appeared in my inbox, I learned a lot about chairs in a short time and found a new appreciation for this commonplace object.

As I searched and gathered materials for the display, I began to see how imagination and inspiration can transform an ordinary thing from complete obscurity to one of curiosity and sometimes great celebrity.

The chair has been creatively reinvented time and again according to the social context of its use, the cultural meaning imbued in it, or the inspiration from which its design sprang. Just think throne, pew, sofa, deck chair, chaise-lounge, and so on.

Take one of Cranbrook’s most iconic chairs – Eliel Saarinen Cranbrook School dining hall chair. Designed to withstand use by teenage boys, it combines durability with sophistication and has stood the test of time as they are still in use after 94 years. At the back of each chair is a bronze crane insert, a symbol that subtly gives identity to the community using the chair.

The 1940s and 1950s saw a flourishing of chair design from Academy of Art graduates, including Florence Schust Knoll Bassett, Ralph Rapson (the first Cranbrook-trained designer to work for Knoll), Charles Eames, Benjamin Baldwin, Harry Weese, and Ruth Adler Schnee. The Organic Design in Home Furnishings competition at the Museum of Modern Art in 1941 generated many of these designs, including collaborative entries from Baldwin and Weese, as well as Eames and Eero Saarinen.

Interestingly, Eero’s later chair designs are all much inspired by nature—the Grasshopper chair, the Womb chair, and the Tulip Chair.

Inspired by nature in a different way, Finnish architect and furniture designer Olav Hammarstrom has a variety of designs that are born of the possibilities to which natural materials lend themselves. Hammarstrom worked with Alvar Aalto and Eero Saarinen and Associates, working on projects such as the Baker House dormitory at MIT and the furnishings at the GM Tech Center. Married to Head of the Weaving Department Marianne Strengell, he designed their house in Wellfleet on Cape Cod, as well as houses for friends and colleagues, along with chairs to go in them.

Furniture design was also the focus of another Academy affiliated designer, Pipsan Saarinen Swanson. Working in partnership with her husband, architect J. Robert F. Swanson, Pipsan typically designed the interiors while he designed the structure and exterior.

But Robert Swanson also designed furniture. Perhaps the most surprising thing I learned was that Swanson invented a ‘Stackable Chair,’ patented in 1957. A form we take for granted nowadays, these chairs can still be found in many buildings and classrooms on Cranbrook’s campus.

It was a great pleasure to share these archival stories with our guests and to explore Cranbrook’s part in the story of the chair. In the process I learned to see an everyday thing in a new light and how creativity can transform the ordinary into the extraordinary.

“Crime, it seems, sometimes does pay”

Actor Edward G. Robinson is often remembered for playing gangsters and wise guys, or, my person favorite role, as Dathan in Cecil B. DeMille’s epic film The Ten Commandments (1956). What most people do not know is that Robinson was an art collector.

That is not exactly true. According to Robinson, at the time of the exhibition Forty Paintings from the Edward G. Robinson Collection at the Museum of Modern Art in 1953, “I am not a collector. I’m just an innocent bystander who has been taken over by a collection . . . I am just a lover of paintings. I do what I do for the sheer joy of it!”

Robinson continues, “If I hadn’t become a movie gangster, it is highly probable that not one of my paintings would have had the chance to collect me. Here is a paradox: Turn killer and you have the means to satisfy your thirst for beauty . . . Crime, it seems, sometimes does pay.”

Unfortunately, in February 1957, Robison was forced to sell his art collection as part of the divorce settlement with his first wife Gladys Lloyd Cassell Robinson. Immediately after, he began to collect again. This second collection would be even bigger than the first.

Unlike film moguls or actors who pay experts to place a couple of easily recognizable masterpieces above their fireplaces, Robinson selected his artworks himself. He bought on instinct and impulse, guided by what he loved. As he said, “You don’t collect paintings – they collect you.”

You may say, this is all very interesting, but what is the Cranbrook connection?

In December 1957, Robinson was in a play “Middle of the Night” at Cass Theatre in Detroit. According to the Sunday, December 15, 1957, Detroit Free Press, “A distinguished art lover, Edward G. Robinson, the actor, dropped in at Cranbrook Academy of Art Tuesday to chat with an old friend, Zolton (sic) Sepeshy, director of the Academy.”

Cranbrook Archives holds the “proof” of this visit, by way of wonderful images from our campus photographer, Harvey Croze.

I did some digging, and Robinson’s personal archives at Boston University have no mention of Cranbrook or Sepeshy. I also could not confirm if Robinson had any of Sepeshy’s art in his collection; none appear in the 1953 exhibition or in the coffee table book about his second collection, Edward G. Robinson’s World of Art (1971).

I imagine it was simply his love of art that brought Robinson out to Cranbrook in 1957, the same reason so many of us are drawn to campus today.

2020 marks ninety years of temporary traveling exhibitions at Cranbrook Art Museum. Perhaps one of the best examples that brings to life this aspect of the Museum’s programs is Cranbrook’s brief but wildly successful partnership with LIFE Magazine.

The Cranbrook-LIFE Exhibition of Contemporary American Painting opened in 1940, ten years after Cranbrook Art Museum hosted its first traveling exhibition, organized by the American Union of Decorative Artists and featuring contemporary interior design. The idea of temporary traveling exhibits at Cranbrook began the same year as the permanent collection was established by founder George G. Booth. It furthered Booth’s commitment to presenting contemporary art as foremost a learning tool for Academy of Art students. It was intended “to remind our students that art is a living thing and that the record of our times is being created from day to day by the artists of this age, and in so doing perhaps to stimulate the creative spirit among those who work here.” 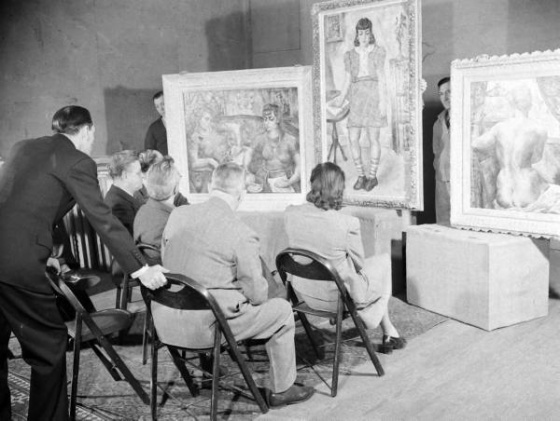 Cranbrook-LIFE was a celebration of contemporary U.S. art meant to symbolize “America’s increasing responsibility as a democratic world art center.” (Life, May 27, 1940) As such, LIFE invited sixty painters, living and working in America, to submit three paintings to be voted on by a jury of six. The painters included Edward Hopper, Charles Sheeler, and Cranbrook’s own Zoltan Sepeshy. The jury, comprised of Sepeshy, two leading art museum directors, an editor at LIFE Magazine, a representative from the Federal Works Agency Section of Fine Arts, and a well-respected American painter and educator, convened in a New York City warehouse where they spent four hours whittling down 180 submissions to the final sixty paintings shipped to Cranbrook for the show. One of these was Grant Wood’s American Gothic! Loaned by the Art Institute of Chicago, the already famous painting appears to be the only piece in the exhibition to come from another art museum. 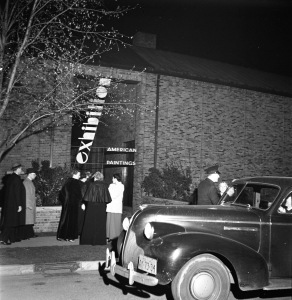 If you’re at all familiar with LIFE, you may be asking yourself why a popular weekly magazine, known for its photographic general-interest stories, would make a foray like this into the art world? According to a 1940 TIME Magazine article, in the previous three years,  “the No. 1 U.S. source of popular knowledge of U.S. art has been LIFE, which has reproduced for the man-in-the-street’s weekly dime some 452 paintings (usually in full color) by U.S. artists.” Your next question might be why it was held at Cranbrook, as opposed to, say, the newly constructed Museum of Modern Art building in New York City? Florence Davies of the Detroit News may have answered that, when she wrote at the time: “Life Magazine picked Cranbrook not only because of the enchanting setting of the place as a whole, but more particularly because it found there ‘work in progress—an atmosphere of creative activity.’” 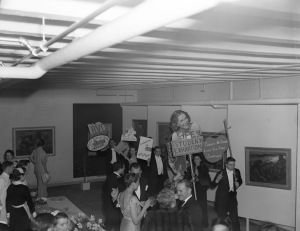 Academy of Art students parade through the opening night gala reminding attendees of the student exhibition simultaneously on display at the Cranbrook Pavilion. Courtesy Cranbrook Archives.

The exhibition drew an estimated 2,500 national and international visitors in the short two weeks it was on display from May 17-June 2, 1940. Because of the size of the show, it could not be held in the current museum building on Lone Pine Road and Academy Way (Eliel Saarinen’s museum building began construction during the exhibition). And, as the Academy student exhibition was currently occupying the Cranbrook Pavilion, the decision was made to utilize the Academy’s Painting Department Studios. Opening night was a festive gala. Attendees, including George and Ellen Booth, Loja and Eliel Saarinen, Edsel B. Ford, Albert Kahn, and “1,000 Detroit socialites braved wintry winds” in formal attire. (Time, June 3, 1940) 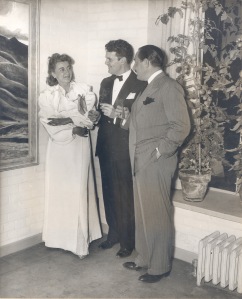 Coming on the heels of the Great Depression and during the beginning months of the War in Europe, pro-American sentiment was high, as evidenced by the placement of potted American-grown tomatoes in windowsills as decoration. According to TIME Magazine, the music for the evening was by U.S. composers and refreshments included “Rhine wine flavored to taste like U.S. new-mown hay.” (!?)

Cranbrook-LIFE marks the beginning of the Cranbrook Art Museum Exhibition Records, which illuminate thirty-six years of temporary traveling exhibits, and are rife with names of renowned artists that have exhibited at Cranbrook throughout its history.

It’s not all in the past, though! Don’t miss Cranbrook Art Museum’s current traveling exhibition,  In the Vanguard: Haystack Mountain School of Crafts, 1950-1969, on view until March 8, 2020.